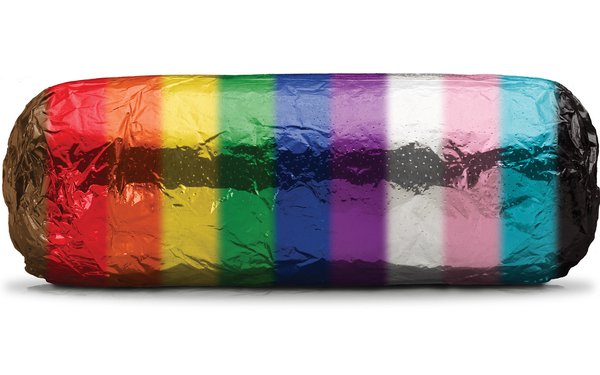 In-person Pride events are back, and many QSR brands -- including Shake Shack, McDonald’s and Chipotle -- are making sure hungry customers know where they stand.

While consumers can expect to see plenty of predictable rainbows and sprinkles as the month unfolds, there’s a more serious undertone this year, as restaurants strive to support the mental health of the LGBTQ+ community -- especially teens.

The Trevor Project, a suicide prevention nonprofit, is featured more prominently than ever as legislative assaults on transgender youth intensify.

Shake Shack, based in New York, is rolling out a trio of “Together is Sweeter” shakes, hoping to recapture the “joy of gathering together to celebrate at Pride parades after the last two years,” it says. Priced at $5.99, the trio features a Chocolate Churro Shake, OREO Funnel Cake Shake and Sprinkle Cookie Shake.

Shake Shack is directing 3% of sales from the limited-edition shakes to the Trevor Project, with a minimum donation of $75,000.

Chipotle is aiming its efforts this year at food insecurity in the LGBTQ community, kicking off with a $250,000 donation to the Happy Hippie Foundation, which provides support services to homeless youth.

Newport Beach, California-based Chipotle is theming this year’s effort “Always Real” and including a round-up option on digital orders to support the Trevor Project and purchase T-shirts, with $10 from each benefiting the nonprofit.

McDonald’s highlights the importance of having safe places to gather with new TV spots starring team members from the Varsity Gay League team members. (That league includes some 40,000 LGBTQ+ and allied athletes across the U.S. )

The ads are running during the "House of Pride," a “variety extravaganza” on Revry TV, which McDonald’s is sponsoring.

And Noodles & Company is bringing back its Pride Crispy,  a rainbow rice crispy treat, with 100% of proceeds going to Out & Equal, another advocacy group.

While some brands announce Pride-themed efforts early on in June, many save their best for June 28, the day that commemorates the 1969 Stonewall riots in Greenwich Village.

Pride is likely especially politically charged this year. While a recent Gallup poll shows that 71% of Americans support marriage equality -- a record high for the poll -- activists say gay rights are under renewed threat from the U.S. Supreme Court. A leaked version of its recent anti-abortion ruling signaled gay marriage rights are also vulnerable.

“The attack on Roe v Wade coming out of the Supreme Court is not just an assault on abortion rights,” says Sarah Kate Ellis, GLAAD president and CEO, in a statement. “It’s an assault on all Americans, especially those of us in marginalized communities. None of us are safe from the extreme anti-women and anti-LGBTQ ideology that now dominates this Court, and we must fight back in every way possible…The time is now and our very freedom is at stake.”

Anti-gay rhetoric is causing distress to rise. New research from the Trevor Project shows that 45% of LGBTQ youth seriously considered suicide in the past year and that nearly one in five transgender and nonbinary children attempted suicide. Over 60% say they live in a home that is not affirming, and close to 40% say they live in a community that doesn’t accept LGBTQ people.