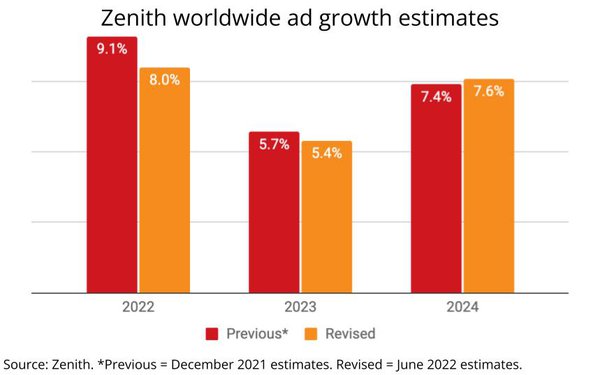 Publicis Media's Zenith forecasting unit this morning released its mid-year update for the ad economy, revising its 2022 global outlook down for 2022 and 2023, but boosting its 2024 projection.

Characterizing it as a "minor downgrade," Zenith reduced its 2022 worldwide ad spending forecast down 1.1 percentage points to 8.0% from the 9.1% it forecasted in December 2021.

"Ad spend has remained on track despite the macroeconomic headwinds that emerged this year," Zenith's new forecast notes, adding, "High inflation, concentrated in essentials like heating, petrol, and food, is forcing consumers to reprioritize their spending, particularly the less well-off, and has led to a drop in consumer confidence.

"But for now, consumer spending continues to grow, as consumers demonstrate their strong appetite for the travel and entertainment experiences that were denied to them over the pandemic. Business confidence is generally high, and corporate investment is rising, and there is little evidence of widespread cost-cutting." 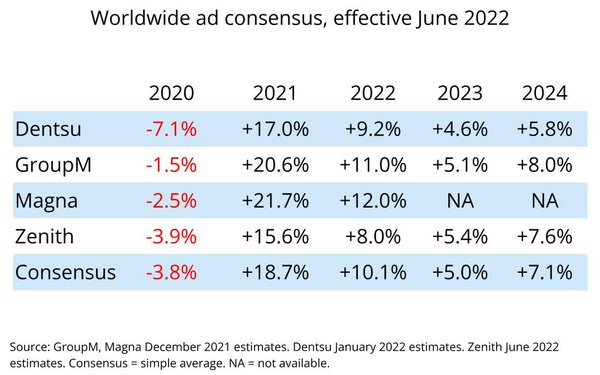 Latin America was downgraded slightly from 9% to 8%, but Asia Pacific was upgraded from 6% to 7%, "thanks to a very strong performance from India."

As for Eastern Europe, Zenith noted "severe disruption in Russia and its closest trading partners after the invasion of Ukraine will lead to a 26% decline in ad spend in Central and Eastern Europe, even though most other markets in the region will continue to grow." 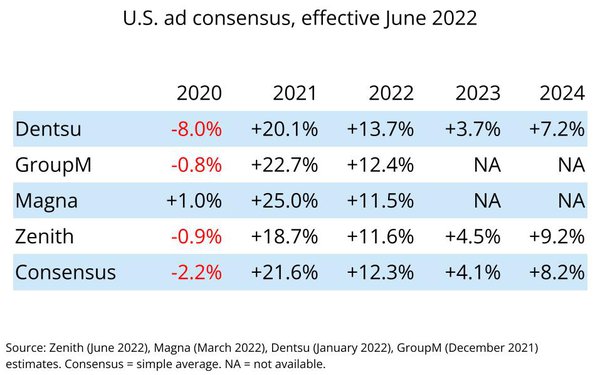