On TV, What's Old For One Generation Is New For Another 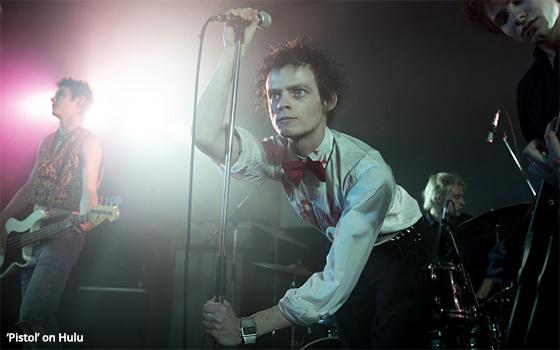 Music, news events and other cultural touchstones from decades ago are supplying a motherlode of subjects for present-day, made-for-TV dramatizations and documentaries.

Two recent examples are the four-part CNN documentary “Watergate: Blueprint For a Scandal,” and “Pistol,” the six-part limited drama series on Hulu about The Sex Pistols, both of which premiered last month.

The Watergate scandal started to percolate 50 years ago in 1972. The Sex Pistols, one of the world’s seminal punk rock bands, was formed in 1975.

To those of us of a certain age, these topics from long ago can still feel surprisingly fresh.

To younger people who would not be born for decades later, they are also fresh, but only because these personalities and events are so new to them.

These TV dramas and documentaries (whether meticulously accurate or not) can represent their very first exposure to them.

“Pistol,” starring Anson Boon as Johnny Rotten (pictured above), is a case in point. The series, which premiered May 31 on Hulu, does a great job of re-creating its time frame and setting -- the mid-1970s in England.

Directed by Danny Boyle, the series puts all the elements together that make a time and place authentic, including costumes, backgrounds, locations and just as important, and difficult to define, people’s attitudes -- the way they talk, walk and interact with others.

The series traces the short, notorious history of the Sex Pistols from their start in 1975, followed by their ascent to worldwide fame as emblems of the British version of punk rock and youthful anger, and their breakup just three years after they started, in 1978.

Watching the show reminded me of an electrifying television moment two years after the band broke up.

This particular event helped to burnish the Sex Pistols’ rebellious image, and made for one of the most memorable guest appearances in the history of TV talk shows.

On June 27, 1980, John Lydon (known only a few years previously as Johnny Rotten) and Keith Levine, Lydon’s bandmate in his new venture Public Image Limited, appeared for an interview with Tom Snyder on the old “Tomorrow” show on NBC.

The interview took up approximately half of this one-hour show. Throughout, Snyder struggled to communicate with his punk-rocker guests to such an extent that the “interview” was more like a verbal sparring match punctuated by periods of silence.

The two rockers were truculent, to say the least. And Snyder clearly had not prepared adequately for the interview and seemed to know nothing about his guests.

At times, Lydon, who continually bummed cigarettes off of Snyder throughout the segment (they were both smoking), stared at the floor and simply ignored Snyder.

In a video found online, it also seems that he spit on the studio floor, possibly more than once. It was electrifying television.

But that was a long time ago. Today, the Sex Pistols who ran riot around the world for three years almost 50 years ago are largely unknown and unremembered today -- reason enough to bring them back to life in a TV miniseries.