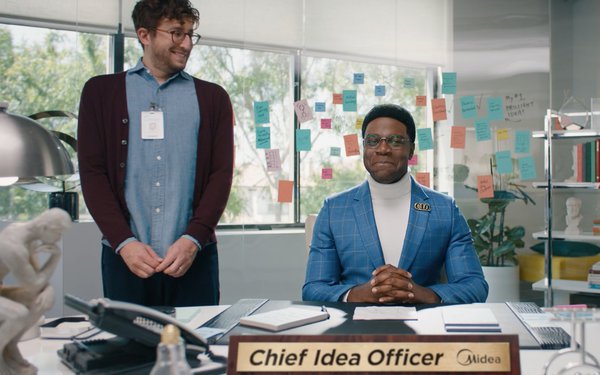 In a :60 spot from Pereira O’Dell, Richardson goes from appliance to appliance (including washing machine, dryer, air conditioner, dishwasher and refrigerator ), claiming each in turn as “My Idea.”

The... yes, idea... here is to play on the pronunciation of the company’s name, which is actually "My-dee-a."

The ad, which launches Wednesday, on social media and OTT and OLV platforms like YouTube and Roku, is the latest commercial deal for Richardson -- who earlier this month began a campaign with LegalZoom. The comic actor actually played an ad exec for a couple of seasons on Comedy Central’s “Detroiters.”

For Midea, three :30 spots, which will follow later this month, focus more on specific summertime product features as Richardson shows up in peoples’ homes with his “ideas”: a dehumidifier “that you don’t have to empty non-stop,” a portable air conditioner “that cools two times faster” and a U-shaped air conditioner, which stays in place when windows are opened and closed.

In addition to introducing the Midea brand to American consumers and getting them to pronounce it more or less correctly, the campaign is also “poking fun at the trend where big companies hire celebrities as C-level creative executives, who then expect us to believe they were actually responsible for coming up with the ideas themselves,” says Nick Sonderup, executive creative director, Pereira O'Dell.

Midea America said that it had more than $1 billion in sales in 2021.

The company, whose products are sold by such retailers as Lowe's, Walmart, Amazon and Home Depot, had built products for other brands prior to launching its own U.S. products in 2019. It also acquired Eureka vacuums in 2016.