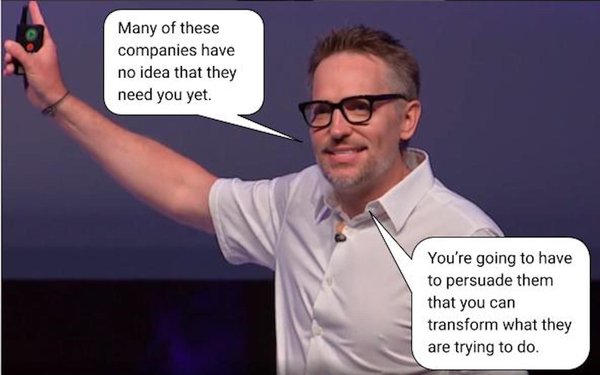 LinkedIn may be best known as a place to recruit new talent, but during a presentation at the Cannes Lions Tuesday, its CEO gave agencies a big tip on how to recruit new business.

“For the advertising industry, these new B2B categories – and the businesses like them – that’s where the growth is going to come from,” LinkedIn Ryan Roslansky told Cannes delegates gathered to here him in the Palais, adding, “Many of these companies have no idea that they need you yet.”

Those companies, represented on a slide during his presentation (see below), include ten B2B services marketers and Roslansky noted they are “growing fast,” “spending much more money on advertising,” and “they know they need to stand out in an incredibly competitive market.

“Many of these companies have no idea that they need you yet,” Roslansky asserted, adding, “You’re going to have to persuade them that you can transform what they are trying to do.”

But even as Roslansky provided attendees with the next big leads for their new business pitches, he deftly segued into one for his own B2B solution.

“If you want to know who the winners are – who they’re going to be – you have to look at where the talent is going. Follow the talent. That’s one of the most valuable and powerful signals,” he said, citing some signals available via the LinkedIn “economic graph.”

Pointing to another chart showing three dozen emerging and fast-growing B2B tech companies (see below), he said, “These companies here, they’re the fastest growing by talent in-flow on LinkedIn.

“They’re attracting the most desirable and highly valued talent across today’s global economy. Most of them are privately-held B2B businesses. They are absolutely in their infancy of making promises. Trust me, most of them are founded by extremely brilliant tech people who do not understand the power of creativity or the power of storytelling. But in this list, there very well might be a bunch of steam engines, which need your help to tell the world that they’re about horsepower.

“I believe there is a huge growth future for the advertising industry. It’ll be led by promise-making. I believe there are new growth categories that need what only you can do.”

Roslansky concluded by offering agencies some free management consulting advice, noting that winning shops will need to adapt their own culture to win new business among this “next generation of 10x growth” clients, noting, “They’re going to look very different than the cool brands that you work with today.

“They’re not the same people that you sell to right now.”