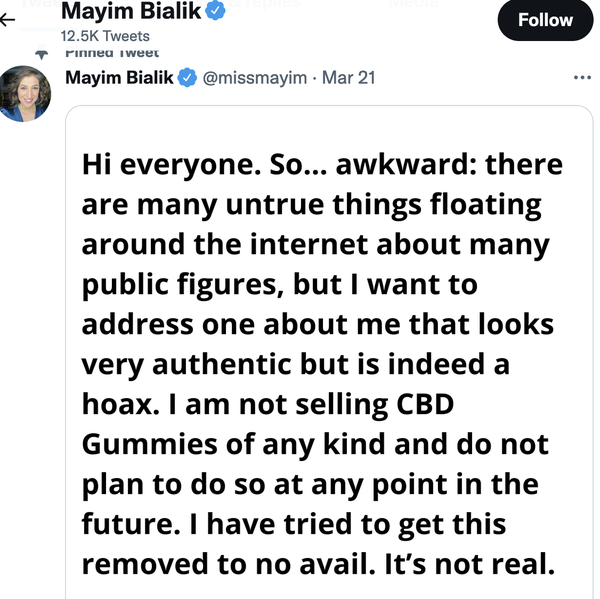 Actress Mayim Bialik believes that internet marketers are putting her name in jeopardy.

That’s why the “Big Bang Theory” star and co-host of the “Jeopardy!” game show is suing more than two dozen companies for allegedly misrepresenting her endorsement of CBD products.

In March, Bialik told her Instagram followers that “I am not selling CBD Gummies of any kind and do not plan to do so at any point in the future.”

She went on to say that said she had tried and failed to get internet mentions of her and CBD products removed.

One Instagram follower commented that she “fell for a “Fun Drops” ad they say is your company.”

“The entire purpose of the Defendants’ wrongful activities is to create the false impression that Bialik is affiliated with and endorses certain cannabidiol products (the “Unauthorized CBD Products”) which she does not,” the suit states.

But it might be easier to become a “Jeopardy!” champion than to ultimately hold each and every defendant to account, because they’re not named in the suit but are identified only by such internet data as IP addresses.

“Defendants operate under the Advertisement/Sponsor IDs and Affiliate IDs via third-party social media and news websites in tandem with websites, including websites which upon information and belief appear to be based abroad in at least the Dominican Republic, France, and India, thereby creating an interconnected ecosystem which functions as an online marketing operation.”

The lawsuit seeks an order from the court requiring the defendants to “instruct all search engines to permanently delist or deindex the URLs used by Defendants to engage in their unauthorized use of Plaintiff’s name, likeness and/or persona in connection with the promotion, advertising and marketing, and offers to sell the Unauthorized CBD Products…”

It's not clear how Bialik’s legal representative, the Stephen M. Gaffigan P.A. law firm, served notice of the suit to the defendants or whether any of them have responded.

Marketing Daily reached out to the firm but had not heard back by deadline.
cannabis, celebrity
Next story loading