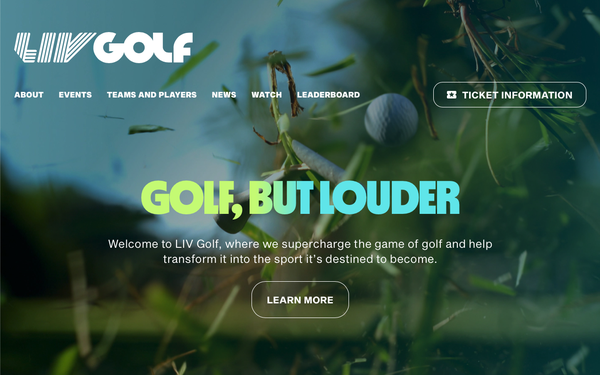 A new professional sports league looking to hype fan interest and consumer marketing through TV is always a challenge.

But there are always TV network takers -- especially in the U.S. markets where there are seemingly lots of traditional, linear TV networks with a focus on sports and/or sports-programming blocks.

This comes as a new, heavily funded LIV Golf tour -- complete with big-time players such as Dustin Johnson, Phil Mickelson, Bryson DeChambeau, and most recently another big-time star, Brooks Koepka -- couldn’t seem to get airtime on the U.S. TV networks for its initial London golf event.

Well, as you may know, wealthy Saudi Arabia-based investors are backing the new LIV Golf tour, with higher prize money for all participants and the winner.

The initial event, to no one's surprise, attracted a number of PGA Tour member golfers.

Immediately, the PGA Tour suspended 17 golfers who participated in its inaugural event in London. And just recently, PGA announced an intent to raise its prize money.

That aside, with such high-profile talent, shouldn't getting a TV deal be easier than a one-foot putt?

According to one report, LIV Golf tried one desperate effort -- to buy program airtime on the Fox Television Network.

Fox did not take the deal. But you can imagine that new events in the U.S. will almost certainly see some live, linear TV network coverage.

Let's pan out for a wider view. For many, it's no secret that hosting major sporting events has been used by countries with little -- or less favorable -- marketing spin to offer some positive panache.

Just look at what the Winter and Summer Olympics have done for certain nations over the decades.

Some countries realize they need to do this more often -- even for modestly viewed sports in the U.S.

Three weeks of live coverage of the Tour de France -- formerly on NBCSN, and now on Peacock and USA Network -- has been viewed to an extent as a travelogue of sorts, helping to boost travel and tourism in that country.

For more than a decade and a half, Middle East oil-rich nations seem to follow this lead to spin some positive vibes by airing prestigious sports events. This includes the United Arab Emirates, Oman, Qatar and others.

For a little more than a decade, some of these nations have also aired professional road cycling. And later this year, Qatar will host the very global and highly watched 2022 FIFA World Cup.

But the fan dynamics -- especially with pro cycling -- can be missing, especially the lack of crowds watching on the roadside as cyclists storm by in races. A story in VeloNews a few years ago put it this way:

“And fans? Hardly any. A smattering of curious expats and locals will turn out when the races start in major cities, but once the racing begins, there is almost no one watching, especially as the peloton spins into the desolation of the desert.”

So what are we left with? Wealthy sports enthusiasts with more money than they know what to do with seem to draw one conclusion: It's a form of personal leisure and interest -- a hobby to some.

Still, those races -- including Tour of Oman, Tour of Qatar, UAE Tour (formerly Dubai Tour) and others -- all have had TV network/streaming coverage.

Some analysts see LIV Golf as an attempt to go deeper -- to offer up a positive image of Saudi Arabia.

Can global TV sports coverage continue to really remedy this these days?