Ryan Reynolds: If At First You Don't Succeed, Become An Absolute Bastard 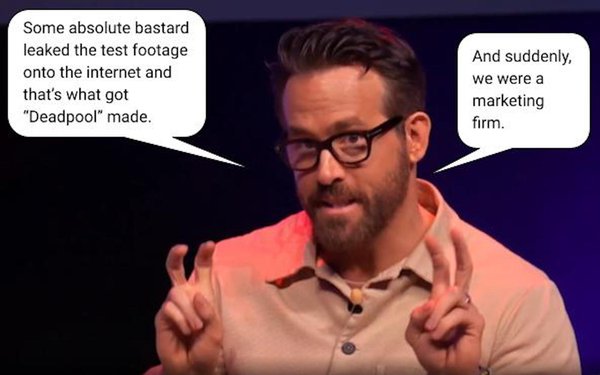 Among the Hollywood A-Listers speaking at the Cannes Lions this week is also one who has become one of Madison Avenue’s A-Listers, Ryan Reynolds, who may be known for hilarious action films and rom-coms on screen, but is increasingly known as founder and Chief Creative Officer of breakthrough agency MNTN/Maximum Effort in advertising circles.

“I spent ten years trying to get the film ‘Deadpool’ made and it was hell. And I couldn’t get it made. And I kept trying and trying and trying,” Reynolds recalled, adding, “We were able to shoot a little test footage. And that test footage, some absolute bastard leaked it onto the internet [gestures with finger quotes] and that’s what got the movie made.”

Even then, Reynolds said the studio didn’t believe in the project, and consequently, gave it a relatively small budget, so Reynolds and his team resorted to “unorthodox methods” for both producing and marketing it.

Since the film couldn't afford the kind of obligatory “spectacle” CGI effects, he said the team focused on bringing the stories character’s to life on the screen, which in retrospect, is what made the film so endearing and enduring.

“As we did this, I was learning lessons left, right and center,” he conceded, adding that when the film wrapped, he drove home in his car wearing his “Deadpool” character’s costume.

“I literally drove home in my car in the suit, because (a) I had spent ten years making this thing so I’m leaving with the fucking suit, (b) try to take it from me – I’ve been training for this movie for three years and I’m in pretty good shape right now, and then (c) I’m going to market with this suit.”

He and his team then used the suit to shoot him promotional footage of him in character, which helped it launch and become the blockbuster success it is today.

“I used some of that sweet 'Deadpool' money to buy Aviation Gin and I needed to market that, so we sort of inadvertently became a marketing company from that,” Reynolds told Clark, adding that he went on to acquire “a big chunk” of mobile carrier Mint Mobile, “and suddenly we were a marketing firm. And we were having the time of our lives.”

From there, Reynolds said MNTN/Maximum Effort went on to pitch and win projects for brands it wanted to work with, continuing to use the kind of authentic, tongue-in-cheek marketing techniques he learned from marketing “Deadpool,” Aviation Gin and Mint Mobile, which Clark noted literally make their brands the “hero” of the campaigns.

That part is intentional and helps differentiate his agency, Reynolds confided, citing Super Bowl ads as an example -- which are very entertaining, but "sometimes the product just disappears. You’re seeing an ad that is so funny, but afterwards, I’m talking about the actor who was in it, but I couldn’t tell you what the product was that they were talking about.

“We definitely make sure that the products we’re talking about are front and center and we are very clear that this is marketing when we are doing it. And in essence, it tends to travel a lot more, in a better way, then if we tried to hide that.”