Hippo Insurance Says Clients Can Stand Up To Problems 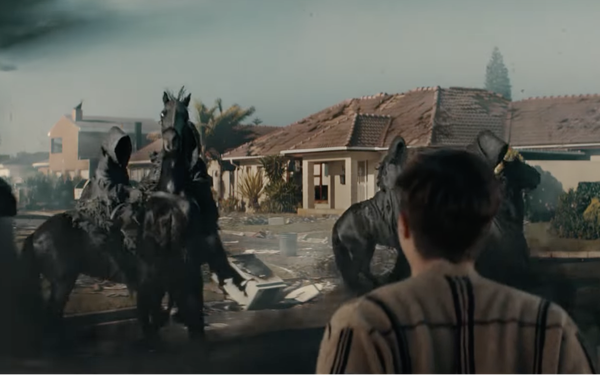 Hippo Insurance, which competes with Geico, Progressive and Allstate, among others, is rolling out a new ad that features a homeowner staring down a catastrophic event.

The ad, via Preacher, shows a black cloud encroaching on a sunny neighborhood. Soon we see a group of horses ridden by men in black hoods galloping through the streets. Against this backdrop, there is one man who senses the danger, but continues to make himself lunch. We see the man nonchalantly leave his home and confront the black-hooded marauders with a scream.

After that, the horses back off and the man says “I think we got it.” A caption reads, “Stand up to the next problem that shows up.”

Hippo is one of the “insuratech” listings that is trying to pry business from established competitors. Hippo is backed by LinkedIn cofounder Reid Hoffman and Zynga founder Mark Pincus. The company hopes to win clients by covering factors that other insurers may fail to cover, like upkeep, security and repairs. For example, Hippo provides a sensor that chirps when water leaks under a kitchen sink so a plumber can be called in to prevent serious damage.

But insurance is a tough category these days. Geico spent $1.5 billion on advertising in 2021 and Progressive spent $827 million, according to Kantar Media.