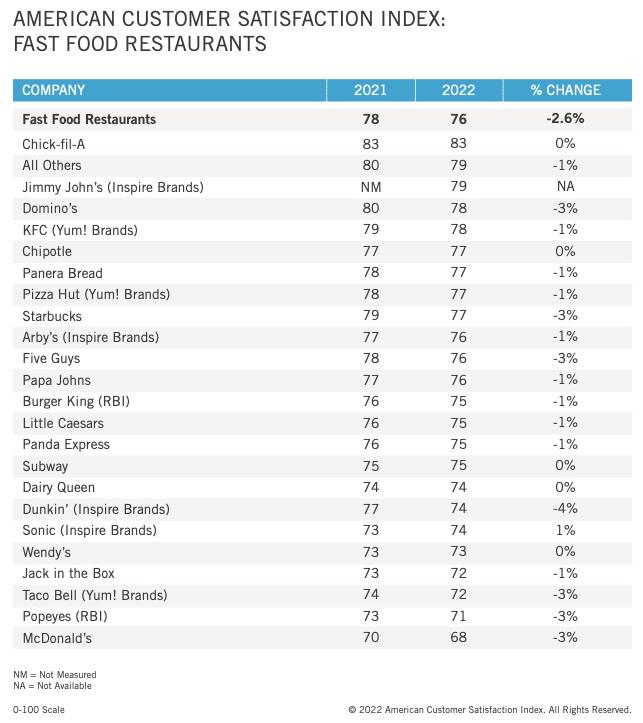 Chick-fil-A is the leader in customer satisfaction not only among QSR chains but all U.S. restaurants for the eighth consecutive year, according to the American Customer Satisfaction Index.

The most notable change among the top 10 QSRs was that of Jimmy John’s, which hadn’t been measured previously by the ACSI, but ranks #3 behind #2, an unidentified group of “all other” quick-service restaurants.

Among customer experience benchmarks for QSRs “accuracy of food order” and “quality of mobile app” are the highest-ranked—with a score of 83 each this year, virtually identical to 2021.

QSRs ranked lowest for “speed of check-out or delivery” (80), “variety of food on menu (not including beverages)” at 79 and variety of beverages on menu (77).

ASCI dubbed the debut of Illinois-based Jimmy John’s high up in its satisfaction rankings as “freaky fast”—a nod to the chain’s delivery policy.

Previous ASCI surveys did not include Jimmy John's because there wasn't a big enough sample size of respondents, according to an ASCI spokesperson.

In the past year, the chain debuted the character of Tony Bolognavich—“the king of cold cuts”—portrayed by actor Brad Garrett while substantially boosting its spending on advertising media.

According to data from Kantar—which tracks everything except paid search and social media, and includes network radio only through March of 2021—Jimmy John’s spent $47.3 million last year, representing a 44% increase over 2020.

In the first quarter of this year the chain spent $13.7 million, down from $19.7 million in the prior-year period.