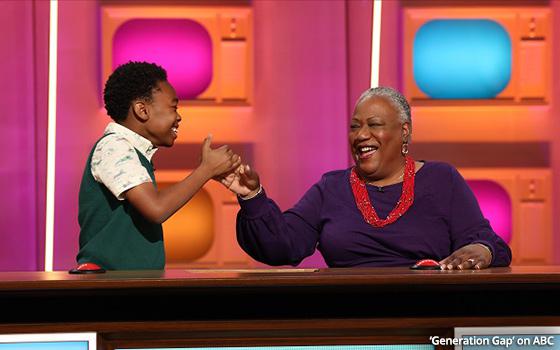 One of the benefits of getting older is earning the right to not care about today’s celebrities, music, movies and TV shows.

This is one of the thoughts that arose while previewing the new ABC quiz show “Generation Gap,” premiering Thursday and hosted by Kelly Ripa.

The show poses pop-culture questions to older and younger contestants to test them on their knowledge of each other’s pop-cultural touchstones.

The show is set up as a contest between two teams, each made up of an older contestant and his or her grandchild or grandnephew or grandniece.

For example, one of the teams on the premiere episode is 70-year-old Janice and her 13-year-old grandnephew McColm, both from New York (and both pictured above).

In the first episode, the generation gap between these oldsters and youngsters is wide indeed.

“What was the name of this super-talented kid?” was one question asked on the show, accompanied by a photo of Shirley Temple.

Those of us of a certain age are not even old enough to have been alive at the height of her fame in the 1930s, but we recognize her anyway.

But on “Generation Gap,” McColm struggles to find an answer and eventually blurts out, “Frank?”

McColm is a great kid, and by all appearances smart and outgoing. But older folks who can recognize Shirley Temple in a millisecond will react with wonder that anyone on the planet Earth would not be familiar with her.

This is the whole point of the show -- to surprise young and old alike on the subject of each generation’s ignorance of the other. The show succeeds in this purpose.

McColm tried mightily to come up with a name for this girl who he somehow recognized as a personality from a very distant past, at least to him.

One wonders whether his earnest answer, “Frank,” was a reference to Anne Frank -- another young girl he might have heard of, but who he conflated with Shirley Temple. Time does go by, doesn’t it?

The show opens with an example of another misinterpretation along those same lines. This happened in a brief clip montage of upcoming questions and answers from future episodes of “Generation Gap.”

“Which Transformer was a yellow Volkswagen Beetle found in a scrap yard?” was a question posed to an older man, who looked to be a grandfather to a young granddaughter.

Befuddled by the question, but evidently feeling an obligation to take a guess, he answered: “Paul McCartney.”

Here again, perhaps this man came up with Sir Paul because he heard “transformer,” as in someone who “transformed” the culture, “yellow” as in “Yellow Submarine,” and “Beetle,” which is self-evident unless you are too young to know who the Beatles were.

And by the way, I could include the answer* to this Transformer question right here if I cared enough to look it up on the Internet, but I do not -- care, that is.

In my day, we didn’t have an “Internet” to go in search of pop-culture trivia whenever we felt like it and we were better off, gurn durn it!

Speaking for myself, with the coming of age, I have made a conscious decision not to exert too much psychic effort to keep up with current trends, comic-book movies and music idols.

I decided that after a lifetime of doing so, mainly in the service of the entertainment journalism I practiced, I realized it was not that important to know all this stuff going forward. An exception is TV, for the obvious reason that I make a living watching it.

As for “Generation Gap,” it is a very easygoing show and also a very easy game in spots. For example, on the Shirley Temple question, one of the older contestants answered it with ease.

And the kids answered questions with ease about which their older relatives had no clue.

Throughout the show, quick-witted Kelly, 51, demonstrated time and time again why she is one of TV’s most enduring personalities.

However, one segment in the premiere episode was focused almost entirely on Kelly herself. Here’s hoping the show has gotten that out of its system in Episode One.