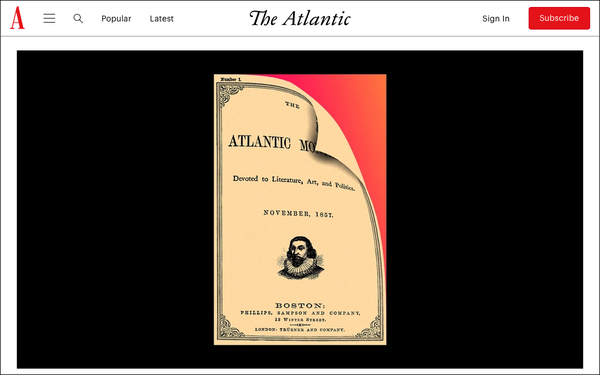 The Atlantic has put all of its journalism, dating back 165 years, in a digital archive. Only 6% of the content had been published online, with the bulk of the record existing in physical copies.

Subscribers will have full access to the collection, including early works by such authors as Robert Frost, Ernest Hemingway, Louisa May Alcott, Sylvia Plath, and James Baldwin. The launch is sponsored by Ancestry.

“One of my great joys as a journalist here is to spelunk into our physical archive in search of treasures,” says Jeffrey Goldberg, editor-in-chief of The Atlantic.  “‘The world is all gates, all opportunities,’ Ralph Waldo Emerson, one of our founders, said, and the gates to our magazine’s rich past are now open.”

The Atlantic archive contains all monthly issues, starting with the first in November 1857: nearly 30,000 articles, essays, original fiction, and poetry, along with every cover in the magazine’s history.

Goldberg adds that the whole record is there, “the good, the bad, the brilliant, the offensive, the ridiculous. We knew from the start that we would engage in no censorship, trimming, or dodging … As journalists, we felt it important to share our archive in full, for reasons of transparency and historical accuracy.”

Included are such gems as Frost’s poem "The Road Not Taken" and a rolling debate between Booker T. Washington and W. E. B. Du Bois on the methodology of Black liberation, the magazine says.

The archive is debuting in tandem with The Atlantic Writers Project, in which current writers reflect on 25 of their influential historic counterparts.