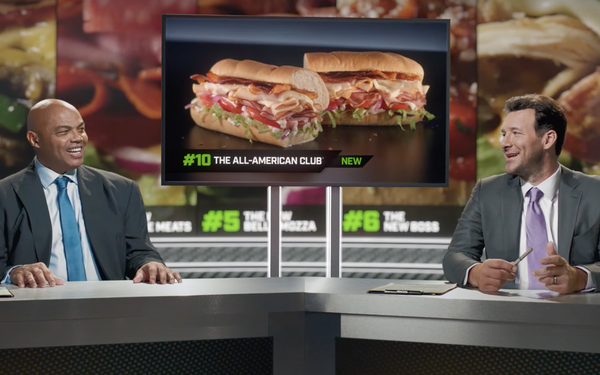 Subway keeps chugging along with its “Eat Fresh Refresh” strategy, taking its celebrity-athlete campaign to the next level. It’s rolling out new ads to support the just-introduced menu updates, focusing on 12 new sandwiches.

The new ads move the irascible Charles Barkley, who has been the voice of the campaign, in front of the camera. He and Tony Romo bro-banter their way through a series of new spots. Each focus on a new sandwich, with an appearance by the athletes that have starred in the earlier ads, including gymnast Simone Biles, basketball legend Stephan Curry, baseball’s Derek Jeter, and football greats Rob Gronkowski, Marshawn Lynch and Patrick Mahomes.

Carrie Walsh, Subway’s global chief marketing officer, tells QSR Land that the new work is part of its playful approach to reinvention, including the final selection of the new menu items.

“Our storytelling approach through creative and media is inspired by the yearlong menu innovation process we went through to assemble this collection of the best sandwiches in Subway history,” she says in an email. “Picking the best of the best in our nearly 60-year history wasn’t easy, and it felt like the way pro sports teams approach the draft every year.”

Walsh says the company “had a blast building on this idea of hosting a sandwich draft, with talent from our elite roster of athletes breaking down picks and analyzing the creation of our sandwich dream team.”

The new work continues the chain’s movement away from the limited-time offers that dominate so much of the industry.

“Driving urgency with limited-time offerings is a tried-and-true strategy in our category, but we found it was ultimately not telling our brand story in a way that motivated people to make Subway their dining destination,” Walsh says.

That insight led to the massive “Eat Fresh Refresh” effort roughly a year ago and the updates that have followed since. “Our change in storytelling is resonating with guests and paying off in both our brand health measures and business results,” she says.

Dentsu is the creative agency, with Carat handling media.

With 37,000 restaurants owned by some 20,000 small business owners, Subway says the new positioning has been a significant hit. Its 2021 revenues beat its forecast by nearly $1.4 billion, with the highest annual average unit sales in seven years.

The Milford, Connecticut-based company says that even with pandemic closings, 75% of the system posted gains at least 7.%% higher than in 2019.

And digital sales for the year topped $1.3 billion, three times the 2019 level.