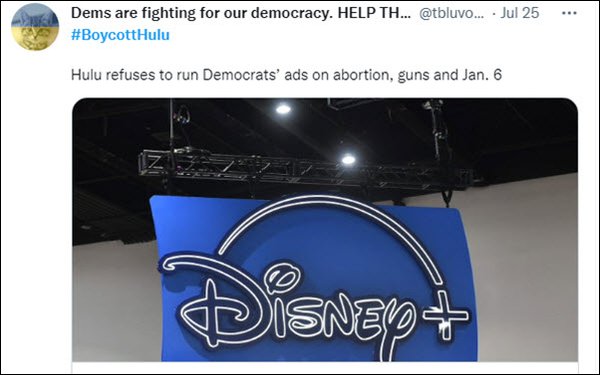 Following heavy criticism from Democratic election committees and the start of a #boycottHulu trend (image above), Disney has announced that Hulu will no longer refuse political ads because they mention too many “sensitive issues” like abortion and gun violence.

“After a thorough review of ad policies across its linear networks and streaming platforms over the last few months, Disney is now aligning Hulu’s political advertising policies to be consistent with the Company’s general entertainment and sports cable networks and ESPN+,” Disney said in a statement released this morning. “Hulu will now accept candidate and issue advertisements covering a wide spectrum of policy positions, but reserves the right to request edits or alternative creative, in alignment with industry standards.”

Patel and the committee leaders both issued statements excoriating Hulu for blocking voters from being exposed to information about crucial issues leading up to the midterm elections.

Hulu relented on the Patel ad on Monday — allowing his campaign to run its original ad creative instead of the doctored ad they had created to get Hulu’s OK for running it — but did not address the larger censorship issue.

According to Axios, Hulu has prohibited “issue” advertising for years, while accepting “candidate” ads.

But while Disney’s move to "align" Hulu's policies with those of its entertainment networks and ESPN+ should open the door for more issue-driven ads, it remains to be seen how the company may choose to exercise the option of requiring changes in line with "industry" standards. The streaming industry, unlike the cable and network TV industries, are not legally required to accept political candidates' ads on any topic, no matter how controversial (barring obscenity).

The difficulty of avoiding controversy and accusations of favoring one side over another are among the reasons that Twitter and TikTok do not take political advertising.

There has been some speculation that Disney is wary of being perceived as left-wing after having lost some longtime financial advantages in Florida due to Gov. Ron DeSantis's retaliation over Disney's stance against the state's "Don't Say Gay" law.