Is America Ready For New 'Beavis And Butt-head'? Probably 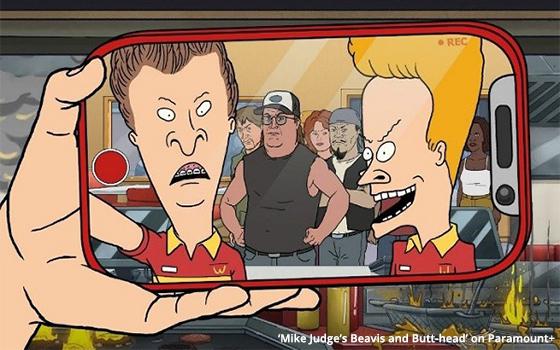 A new “Beavis and Butt-head” series coming to Paramount+ this week revives memories of the original MTV series that made headlines in the 1990s.

Back then, this cartoon show about two aimless teens was blamed at least twice for tragedies involving the behavior of children who may have been influenced by it.

In one, a five-year-old boy lit his family’s trailer home on fire. In the other, an 18-year-old dropped a bowling ball onto a highway, causing an accident.

Some believed the behaviors were similar to behaviors seen on episodes of “Beavis and Butt-head.”

Both situations were later found to have nothing to do with the show. Nevertheless, the show joined the pantheon of 1990s TV shows that made headlines for their excesses. Some of the others were “Jerry Springer” and “Jenny Jones.”

But as the TV Blog notes occasionally, due to the way audiences have shrunk for specific TV shows compared to three decades ago, TV shows today have none of the notoriety and influence that shows had 30 years ago, when only a couple of dozen TV networks mattered to anybody.

Moreover, so many content taboos have been shattered since the ’90s that almost no show ever makes headlines anymore for shocking anyone.

All this is a long-winded way of predicting that the new “Beavis and Butt-head” will not get nearly the attention the original did.

Before continuing this TV Blog, an editorial note: The publicists at Paramount+ have decreed that reviews and recaps of the first two episodes of the new “Beavis and Butt-head” are embargoed until Wednesday (Aug. 3).

The TV Blog’s position on press embargoes is that they are arbitrary and unnecessary. Having said that, the TV Blog has no intention of incurring the wrath of the Paramount+ publicity department.

Thus, this blog will not contain specific opinions about the quality (if any) of the new show. Nor will it report on what happens in either of the two episodes -- i.e., “recap” them -- because nobody cares.

Here is a fact, not an opinion: The new “Beavis and Butt-head” is as stupid as the original. This is a factual statement because it is inarguable.

The show is meant to be intentionally stupid. Specifically, the stupidity of the two title characters is the central “fact” of the whole thing. It's where it derives its comedy, which appeals to some, but not to others (also a fact).

For the record, the official title of the show is “Mike Judge’s Beavis and Butt-head.” He is the creator of the show.

Afterwards, he went on to other projects, such as the movie “Office Space,” revered as one of the finest workplace movies ever made, and the animated series “King of the Hill," which just might be the finest sitcom, animated or live-action, that has ever been made.

Whether the new and old “Beavis and Butt-head” shows measure up to the quality of those works is a matter of opinion.

Episodes 1 and 2 of “Mike Judge’s Beavis and Butt-head’ start streaming on Thursday (Aug. 4) on Paramount+.