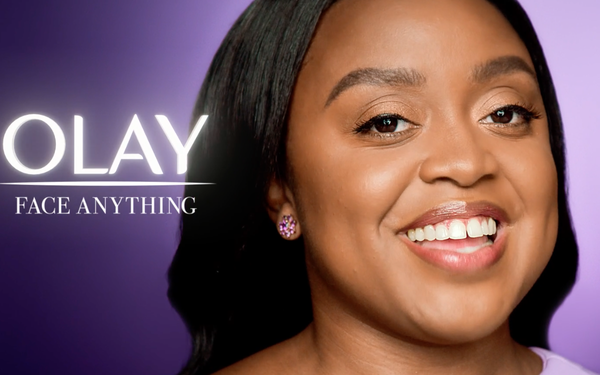 Riding high on her three comedy Emmy nominations, Quinta (“Abbott Elementary”) has another reason to smile: She’s the new face of Olay.

The campaign, from the Badger Agency, delivers on its ongoing promise to use only unretouched images, cultivating more realistic images.

It also comes at a time when Olay, parent Procter & Gamble and many beauty and personal care brands are trying to make sure their marketing is as diverse as the customer base.

In a recent report on Black beauty consumers, McKinsey & Co. says that within the $60 billion U.S. beauty industry, Black consumers -- about 41 million people -- spent $6.6 billion in 2021.

That amounts to 11.4% of the total, slightly less than the 12.4% Black representation in the total population. Yet the analysis reveals a significant lack of equity. Black brands, for instance, account for 2.5% of revenue. And fewer than 5% of all beauty employees, including in retail, are Black.

“Black consumers simply don’t see themselves in beauty advertisements on TV, in magazines, or on billboards because of a lack of diversity in ad campaigns,” McKinsey says.

The report further notes that marketing is a big part of the problem, citing Nielsen data that between 2011 and 2019, only 2% of beauty budgets went to Black-oriented media.

“In our focus group, we found that many beauty advertisements—regardless of whether they were on TV, in print, or online—didn’t resonate with Black audiences because they neither portrayed a diverse population nor spoke to people with more melanin in their skin and curls or kink in their hair,” notes McKinsey.

Fewer than half of those surveyed had positive feelings about ads.

The findings suggest that 75% of Black beauty consumers might be swayed toward beauty brands by ads featuring more skin tones across all races. Conversely, 75% might decide not to buy from a company that does not reflect racial diversity.