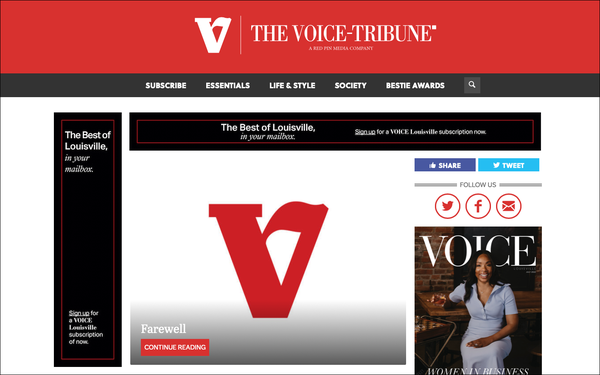 The Voice Tribune, a lifestyle magazine based in Louisville, Kentucky. is closing. The August issue is its last.

The “gut-wrenching” decision to kill the monthly print magazine and web site was based on several factors, according to  Publisher Janice Carter Levitch Humphrey.

“COVID has impacted our industry and in an effort to support local businesses we lowered our advertising rates,” Humphrey writes.

Humphrey continues, “As we monitored the revenue stream / cash flow and continued to receive price increases from our printer for paper and ink supply, and increases in rent, payroll, etc., we had to conclude that we could no longer sustain the business without continued and increasing personal subsidies. Thus, it is unavoidable that we will be closing The VOICE TRIBUNE as of AUGUST 31, 2022.”

Barely a month before, Humphrey wrote that “we want our loyal supporters – readers and advertisers who are local, regional, national and international –  to feel exhilarated when they see our publication delivered to their doorstep.”

Humphrey and her husband, CFO Steve Humphrey, “have invested an enormous amount of time and money to sustain The VOICE TRIBUNE,” she continues.

The editorial team has been led by Alexandra Hepfinger, whose monthly column brought a sparkle to the product, but who admitted in February that the conditions created by COVD-19 were leaving her “a little discouraged.”

The magazine, which started as a weekly newspaper, was branded with a large “V” logo.

Humphrey concludes, “It has been my honor and privilege to publish and deliver The Voice Tribune to our beautiful community monthly. Every member of our team brings incredible talent to the production of each issue and for that I am forever grateful.”

The staff was planning a farewell “celebration” for Aug. 5. ‘