Palisades, KSL Media And The Slow-turning Wheels Of Justice 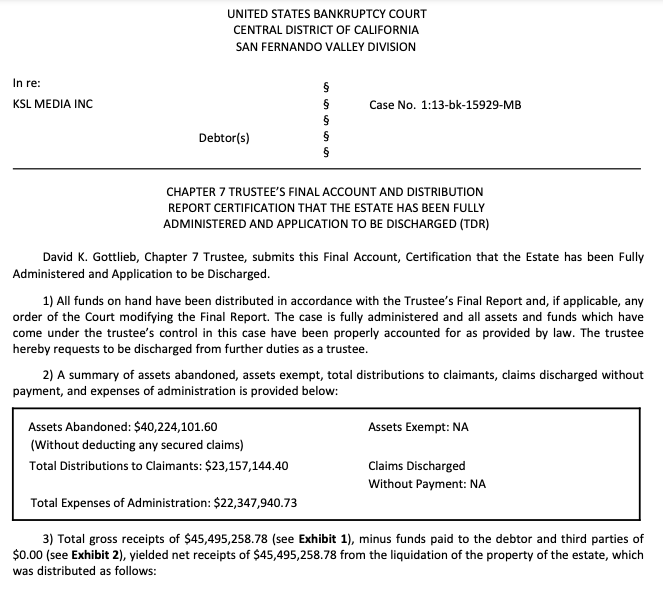 Since hearing about the closing of Palisades Media Group in July, and the millions in debt it reportedly has accrued—including media creditors that are owed for previously-placed ads—I’ve been checking periodically to see if it has filed for bankruptcy protection.

Nothing yet. But it reminded me of another well publicized agency closure from back in 2013—KSL Media. Just for the heck of it, I checked to see when that case was wrapped up, and I was surprised to discover that it wasn’t officially closed until June 14 of this year (see trustee's final report here). Six weeks ago!

It took nine years for that case to wind its way through the courts. Granted not much has happened since the trustee file his final report in 2020, but still, talk about the wheels of justice moving slowly.

That case was filed during the Obama Administration. And TikTok was still three years from launch. And the pandemic? That was the stuff of popular movies like Contagion, which came out two years before KSL Media filed for Chapter 11 protection on Sept. 11, 2013. Nobody thought such a catastrophic health crisis would actually happen, at least not here, because the Obama team had elaborate plans in place to thwart any potential outbreak. Those plans were dismantled by the Orange-Haired Wonder.

Meanwhile Palisades CEO Roger Schaffner hasn’t returned queries concerning the agency and neither has his lawyer.

But given the millions owed and the lawsuits that are likely from creditors, my guess is that a bankruptcy filing is imminent. Stay tuned.