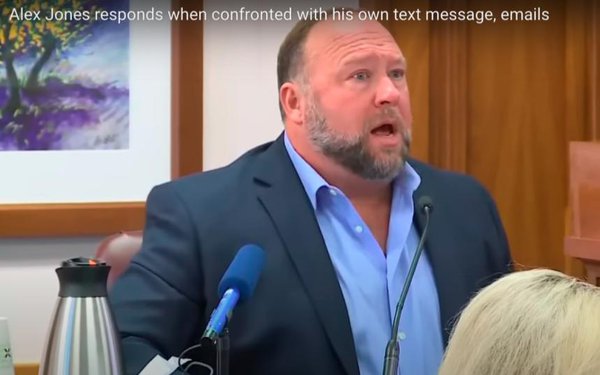 It was the exact moment when Alex Jones' heart would have broken -- if he had one. Instead, it was the moment (see above) when one of the Sandy Hook plaintiff's attorney's told him his lawyers had inadvertently sent him the entire history of all his text messages related to the Sandy Hook trial, and what followed was the best piece of video this week (see below) as the fake info warrior flummoxed his way through the rest of his examination.

I'm leading with it in this week's "Red, White & Blog" column, because it was also a moment when some justice was rendered, and regardless of what damages the  trial's jury settle on, at least the entire world knows he's nothing but a fake conspiracy theorist who lies to attract an audience he monetizes by selling his own brands of snake oil --  er, I mean "dietary supplements" -- as well as unwitting or uncaring advertisers.

Jones is not the first misinformation warrior to exploit the appetite of some Americans for lies, and he won't be the last. But he is part of a broader trend toward alternate reality America has seen seeping into politics, voting, and lawmaking that are undermining the truth necessary to have an informed public and functional democracy.

Even as Jones has been testifying one truth -- under oath and at the risk of perjury -- his show has been spinning an alternate one that the trial is just an extension of the kind of "scripted" conspiracy he alleged the Sandy Hook school shootings were.

I don't expect the "Info Wars" followers who buy into that crap to be moved by it, but there was another moment of zen-like truth for me personally. It was when Jones was asked under oath whether he believed the Sandy Hook shooting actually happened and he said, "It's 100% real." 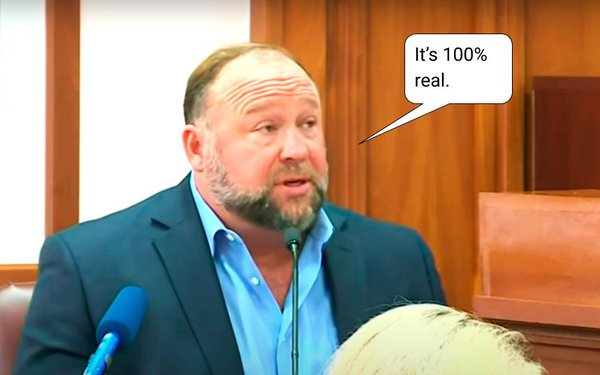 I can only imagine how Jones will spin that one into future conspiracy theories he promotes, but at least we got him on record for this one.