On A&E Show, Ordinary Folk Take Ex-Cons Into Their Homes For Extended Stays 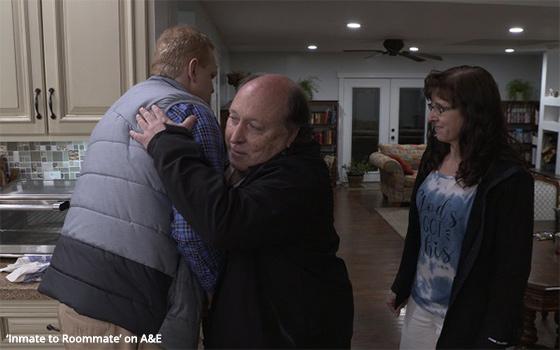 A new docuseries coming to A&E this week demonstrates that every once in a while, TV comes up with something new.

In this one-hour show titled “Inmate to Roommate,” well-meaning, law-abiding people have agreed to help convicts just released from prison adjust to the outside world and make a new start in their lives.

To accomplish this, these nice people will host these convicts in their homes -- in effect, volunteering their homes to serve much the same purpose as traditional halfway houses.

TV has had numerous prison docuseries over the years, but if there has ever been a TV show quite like this one -- on this subject and with this scenario -- then I am not aware of it.

Adding to the drama: It becomes clear in the premiere episode of “Inmate to Roommate” that these hosts are each unprepared for their guests and the impact these ex-cons might have on their lives and households.

The main issue: The hosts really do not know them that well, even if some of them think they do. Nor do some of them completely understand the prison life these convicts have lived in serving out their multiyear sentences.

For example, a married woman in Indiana who has corresponded for five years with an inmate about to be released after 18 years in a Georgia prison has never met him in person.

This particular inmate was doing time for various crimes such as possession and sale of valuable stolen goods such as jewelry, resisting arrest and more recently, attempting to escape while in prison.

As the day of his arrival draws near, her husband is skeptical. He wonders if this ex-con will honor the rules of their conservative, Christian household.

He also wonders whether the freed convict (seen in the photo above embracing the husband as the wife looks on) believes he is going to get something more than just friendship from the husband’s wife.

The first episode introduces us to four households in four different states that will each welcome an ex-convict for an extended stay.

From just one episode, it is not yet possible to guess which of these inmate-roommate relationships will work and which ones will fall apart.

In one of them, it may be the freed inmate who has second thoughts about the home he has agreed to live in.

It is the Michigan home of a psychiatrist with whom the inmate is acquainted. But the doctor’s house leaves much to be desired.

To cut to the chase, the doc is an eccentric who is also a hoarder whose home will remind many of another A&E show, “Hoarders.”

“Hoarders” and other shows such as the real-life police procedural “The First 48,” and the shocking addiction series “Intervention” have been touchstone series for A&E.

With “Inmate to Roommate,” A&E finds its true voice once again.