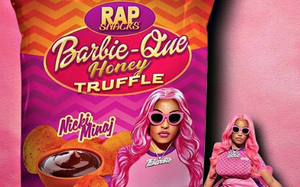 In a lawsuit filed last week in federal court in Los Angeles, Mattel alleged that Rap Snacks is infringing on Mattel’s trademark rights, whose origins date to 1959.

On June 30, People magazine reported exclusively that Barbie-Que Honey Truffle Potato Chips “are cleverly named after the nickname Minaj's fans have given the artist (Barbie) and the term for her fanbase (Barbz).”

“Rap Snacks made the deliberate and calculated choice to launch a new product line using Mattel’s famous BARBIE trademark. That choice, made without any prior notice to Mattel, was unlawful,” the lawsuit states.

The company alleges that it asked Rap Snacks to cease and desist but was unsuccessful—thus it sued “as a last resort to protect its rights and prevent further consumer confusion.”

Minaj is not a defendant in the case. In 2011, she collaborated with Mattel on a one-of-a-kind Barbie doll for a charity auction by Project Angel Food to assist people affected by HIV/AIDS.

Marketing Daily reached out to Rap Snacks for comment but had not heard back by deadline.