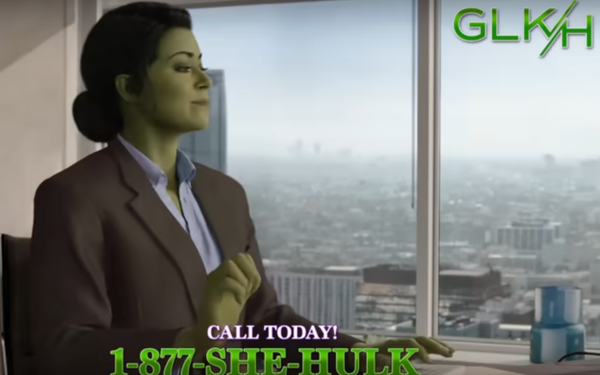 “She-Hulk,” the much-talked-about Disney+ show, premieres today -- and just a day before, Marvel dropped this nugget.

The spot is a parody of lawyer ads with Jennifer Walters (Tatiana Maslany) playing the role of eager attorney/pitchwoman.  The ad begins by asking if you’ve ever been made to feel like you didn’t belong and been called an abomination by a supervisor? Jennifer Walters then advises not to get angry, but get a lawyer.

Walters promises that the firm of Goldman, Lieber, Kurtzburg and Halloway will fight for you, the non-superhuman client. As She-Hulk flexes, her voiceover says that she goes green, so you can get green.

The ad is a cute reminder of the premiere of the show, which has received so-so reviews so far, though Fatherly praised as “The best Marvel show for a date night, ever.” The review recommends it to adults “and people who are kinda meh on Marvel.”

That’s probably not enough to make me want to watch, but I do appreciate the fake ad as a way of introducing the show.