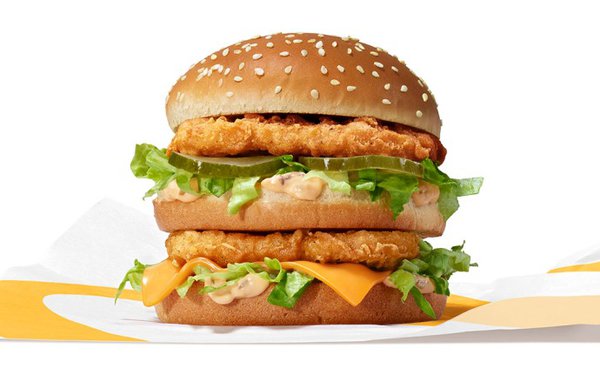 After standing aside in the fast-food chicken wars, McDonald’s is trialing a Chicken Big Mac, although it’s not clear whether the item will go national.

The Chicken Big Mac was introduced in the U.K. and Ireland in January and will be available for a limited time at Miami McDonald's, starting later this month.

A Washington Post article about the test says the chain substitutes “tempura chicken patties” for the burger meat.

The move comes after McDonald's was caught apparently flat-footed after Popeye's introduced its sandwich in 2019 and McDonald's lacked a “premium” entrée to compete. McDonald’s did introduce a Crispy Chicken Sandwich in 2021.

The Big Mac was introduced by McDonald’s in 1967 in Pittsburgh by franchisee Jim Delligatti. It went nationwide in 1968.

At the time, it was designed to compete with Big Boy Restaurants’ Big Boy hamburger. The sandwich was an immediate hit, making up 19% of all sales for the chain by 1969.

Since then, the Big Mac has taken on greater significance.

Over the years, the Big Mac itself has spawned many iterations, including a Double Big Mac, which contains four patties, and the Little Big Mac, which is about half a Big Mac, with no middle bun or second patty.

But replacing the beef patty with chicken is a bold, unprecedented move.

As the Washington Post points out with its review, “the chicken version is not that different from its beefy brother, with the patty itself taking a back seat in a minivan of flavors driven by the toppings (although the crisp patty does add a nice textural contrast that the regular burger does not).”

McDonald’s CEO Chris Kempczinski said on a Q2 earnings call: “Chicken continues to be a significant opportunity for us… We've got some great global equities already in our McNuggets and with McChicken, but we also have some equities in McCrispy and McSpicy that we think we've got an opportunity to do more with globally. So that's going to be a priority area.”

Time will tell whether you will see a Chicken Big Mac at a McDonald's near you, but if it comes to fruition, it will fulfill the chain's long-term promise to “Have it your way.”