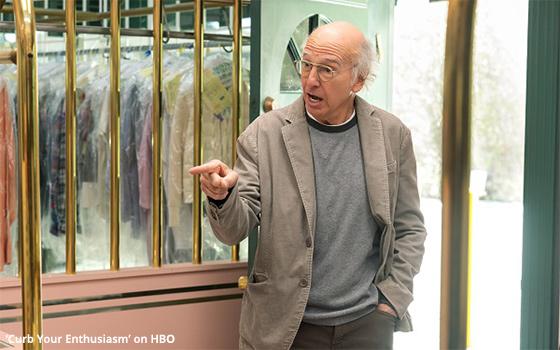 Larry David has agreed to write, produce and star in yet another season of “Curb Your Enthusiasm” for HBO, indicating that he has little enthusiasm for retiring.

The new season will be the show’s 12th since it first premiered in October 2000. HBO made the announcement on Tuesday.

The very brief announcement did not say when this new season would premiere, or how much of it has been produced so far.

The announcement provides further proof that HBO and its subscribers love “Curb Your Enthusiasm” so much that David, 75, is basically welcome to produce a new season of the show anytime he feels the urge to do so. When the show started 22 years ago, Larry was 53.

This has been the pattern throughout the latter portion of the 2010s, starting in 2017. That was the year the show came back after a six-year hiatus with new episodes for a ninth season. Up until then, everyone except Larry believed the show was done.

With this 12th season commitment, Larry David signals that he still has something to say about contemporary life among his circle of friends and acquaintances in the better neighborhoods around L.A.

“Playing the role of Larry David has been the greatest honor of my life,” David said in the HBO press release.

“In researching this multifaceted, multi-talented man, I discovered that there’s more to him than I ever could have imagined: He speaks six languages, brines his own pickles, and spearheads a national movement to install a bidet in every home.

“I’ve also been told from numerous sources that he is the most generous of lovers. I am so excited to once again transform into this force of nature. I only pray that I can do him justice,” he said.

HBO’s renewal of “Curb Your Enthusiasm” revives memories of a time 20-plus years ago when HBO enjoyed a Golden Age of almost constant success -- “Curb,” “Oz,” “The Sopranos,” “Six Feet Under,” “The Wire,” “Carnivale,” “Deadwood,” “Big Love,” “Sex and the City,” “Da Ali G Show,” “Entourage,” “Flight of the Conchords” and others too numerous to mention.

Larry David is probably as surprised as anyone that out of all of those legendary TV shows, his is the only one still being made today, and that he would be the last Golden Age star of HBO still standing.