All The News Fit For Subs 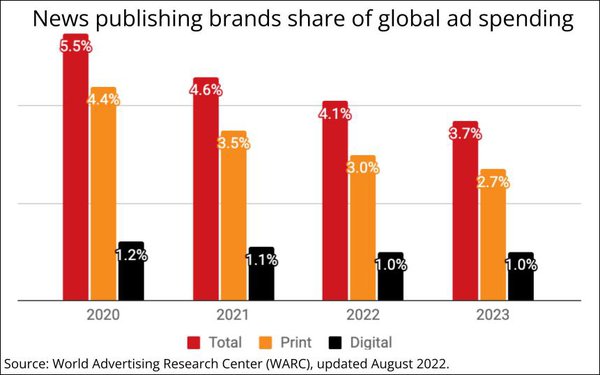 Late last year I published one of my favorite "Red, White & Blog" columns. It correlated two pieces of disconnected trend data: the rise of internet access penetration; and the decline of the world population living in a democracy. If you haven't read it, you should, because my main point was that it has been the ability of unsavory actors to so easily spread misinformation that has dumbed the world down and contributed to an erosion in support for democracies.

Today, I'd like to add another correlation: the erosion of advertising support for news media brands. It struck me when I was looking through a release of a new report from the World Advertising Research Center (WARC) for its latest advertising forecast, which included a line item on news publishing brands.

WARC estimates that over a four-year period they will lose nearly two percentage points of advertising share, falling to just 3.7% of total ad spending in 2023.

Interestingly, the erosion of their advertising is happening faster in print than for digital outlets, though their share of both mediums is quite small.

That's noteworthy for many reasons, including the fact that news publishing brands were among the ad industry's earliest media, and they sustained themselves throughout the 20th Century's media industrial revolution, including the rise of broadcasting (both radio and TV), satellite, cable, a variety of intermediary technologies that didn't take hold, and ultimately online and mobile media. At least until the turning of the last century when the economics of news media essentially imploded, because the ubiquity of digital access meant that the value of any news story essentially went to nil the minute it got disseminated.

Obviously, a few really great news publishing brands have adapted and even thrived, including The New York Times, The Washington Post, The Wall Street Journal, and some other big metropolitan and nation-leading newspaper brands. A few digital native ones have done okay too, but without signaling them out, I think that the success of some of those may have done more harm than good in terms of the flow of misinformation and the decay of democracies.

It's one of the reasons I pay to subscribe to so many newspapers, because I better than many subscribers understand the importance their subscription models play in an era of advertising erosion.

Today I'm adding a paid subscription to The Hartford Courant, because as a Connecticut resident, I think it's important to sustain what they do.

I hope some of you will do the same with your favorite local, national and global news publishing brands, because, well, just look at the advertising trend lines.

And then look at the one for people living in a democracy. 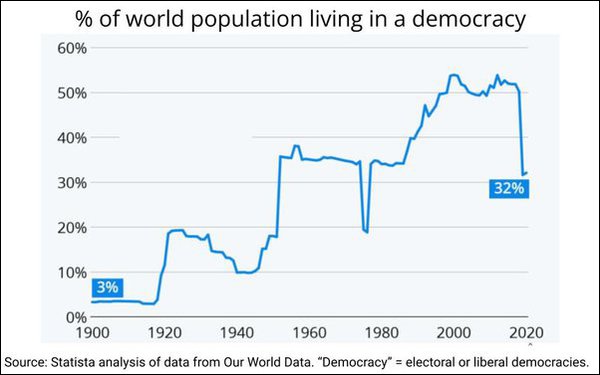