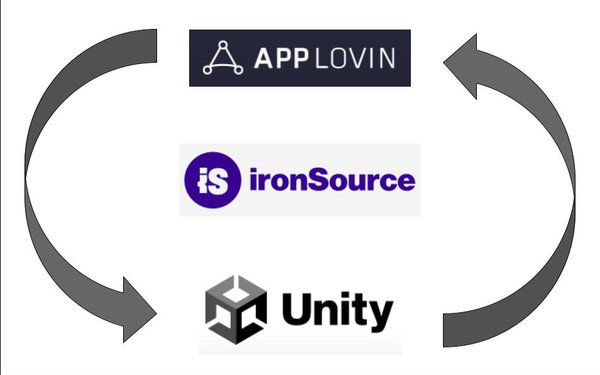 If you're like me, you're probably only familiar with the names AppLovin, ironSource and Unity as names on the source lines of charts in the reports of Wall Street analysts following the mobile apps industry's growth. And while they are indeed the app industry's chief statsmasters, they also are an integral part of the so-called "app economy."

Much of the data they get comes directly from servicing the multitudes of app developers with the tools they need to develop, distribute and market their applications to consumers, app stores, as well as marketers and agencies. But in recent weeks, these big, publicly traded companies have been mounting proxy battles to consolidate the industry -- and it's not clear who may come out on top, or what this will mean to the next phase of the app economy.

“Admittedly, these are three companies that we don’t spend an awful lot of time thinking about in our space, because they are not typically associated with large brands frankly, but it’s really interesting because this is possibly one of the most valuable mergers being contemplated in this industry for quite a while," GroupM Global President of Business Intelligence Brian Wieser noted during this week's "This Week Next Week" podcast he co-hosts with Kate Scott-Dawkins.

Wieser and Scott-Dawkins provided an update of the app developer proxy war, as part of their podcast focusing on the app economy, because it obviously has significant implications for the ad industry too.

While they are mainly tools and data providers, they also provide resources that "many of the world's app developers rely on and need in order to spend money on advertising," Wieser said.

Equally important, the Big 3 app economy developers spend money on advertising as well. The biggest among them, AppLovin, currently is "more than a billion-dollar advertiser," he said.

"Ultimately advertising is an important end-market for these guys, because to drive app installs, it’s so important for most of their end customers to spend money on advertising. And it’s a main source of revenue for most of their customers," Wieser noted, adding, "It's a drama we will be monitoring, and everyone should be paying attention to it."