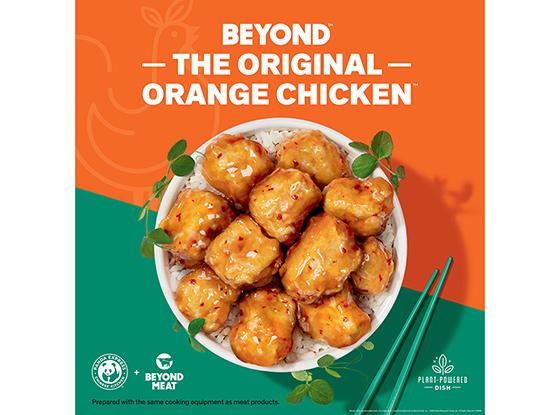 Panda Express is the most recent chain to jump on the meatless bandwagon. Starting today, the chain is launching Beyond the Original Orange Chicken.

The entrée was developed with Beyond Meat to capture the crunchy texture of Original Orange Chicken.

Following successful regional launches in 2021, the entrée will be available for a limited time at more than 2,300 U.S. Panda Express locations.

“Our team has been overjoyed by the undeniable excitement and incredible demand generated when we first introduced Beyond The Original Orange Chicken last summer as an innovative twist on our most iconic dish,” said Andrea Cherng, Chief Brand Officer at Panda Express, in a statement.

Beyond the Original Orange Chicken was first launched in Southern California and New York. Now, Panda is bringing the dish to 70 locations in 10 markets.

"We are thrilled to offer Beyond The Original Orange Chicken to consumers nationwide for the very first time,” says Dariush Ajami, chief innovation officer at Beyond Meat. “By partnering with Panda Express to introduce new and innovative plant-based options that deliver the delicious taste and experience of their iconic menu items, we're enabling people to enjoy their favorite dishes with the upsides of plant-based meat.”

Panda's launch comes as other restaurants have struggled with meat-substitute dishes.

McDonald's ended its McPlant trial in late July and Wendy's tried a bean-based burger in 2021, but that entrée quickly disappeared from the menu.

For its part, Burger King its menu to include more burgers made with Impossible patties.