Let's Get Them Today, Then 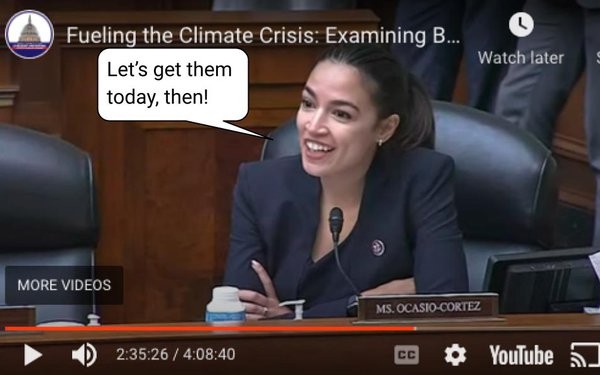 Two days of Congressional hearings addressing how the fossil fuel industry buys and pays for PR and advertising to “greenwash” its reputation to influence public opinion, regulation and legislation ironically revealed how it has bought and paid some lawmakers defending it.

Hearings by two House oversight committees on Wednesday and Thursday were supposed to explicitly examine the role “public relations” firms play in undermining public perceptions, lobbying and legislation preventing action on climate change, but they ended up devolving mostly into partisan attacks by Republican lawmakers from energy industry dependent states either on “Democrats,” “the majority,” or the “Biden Administration” for creating an “energy crisis” that is the real problem that needs to be addressed, not the fact that the fossil fuel industry is accelerating climate change that is making the planet less inhabitable, as well as causing economic and public and security threats.

Aside from explicit PR and advertising tactics used by the fossil fuel industry, it also revealed the powerful lobbying influence it has over those lawmakers who used every argument to deny that climate change is one of humanity’s greatest threats.

One incredible example was an interrogation by Louisiana Congressman Glen Clay Higgins who savaged one witness – New York State Climate Action Council Founder and Executive Director Raya Salter – during her testimony, and went on to make a case that many of the pro-fossil fuel industry Republicans made to argue against regulating the industry: that it doesn’t just market sources of energy, but is the source of a petrochemical industry that produces many other products that people rely on. But Higgens went a step further, arguing the fossil fuel industry is responsible for our very existence.

“Everything you have – your clothes, your glasses, the car you got here on, your phone, the table you’re sitting at, the chair, the carpet under your feet – everything you’ve got is petrochemical products,” Higgins badgered Salter, adding, “What would you do with that? Tell the world.”

You can see his exchange at about the 2:06:30 point in the YouTube video above. Watch it and tell me what you think?

I found Higgens' argument – especially his assertion that petrochemicals were the source of things like wooden desks, chairs, carpeting and clothing ironic – coming just a day after the founder of one world’s greatest, and most sustainable clothing brands, Patagonia’s Yvon Chouinard, donated his $3 billion stake in the company to a trust to perpetually fund action to protect the environment and fight climate change.

But it was Higgins' next argument that I found most unsettling as an American voter and an inhabitant of planet Earth: That the fossil fuel industry’s role in climate change is a God-given right.

“The Lord gave us dominion over the planet and the creatures there on,” Higgens asserted. 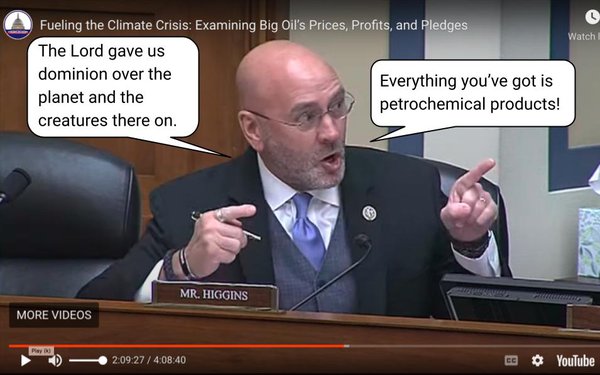 The exchange was so unsettling that, New York Congresswoman Alexandria Ocasio-Cortez followed up by personally apologizing to Salter for his behavior.

Salter responded by thanking AOC for “her courage,” which inspired her to have her own, adding, “They can come at me all day long.”

Then proving why she is the most badass person in Congress – and the one the Right fears the most – AOC smiled and said, “Let’s get them today, then.”

(Full disclosure: AOC represents the district in the Bronx where I grew up, so I'm kind of partial to her.)

She then turned her attention to another expert witness – Cornell University urban and environmental policy professor J. Mijin Cha – asking her explicitly about the role the fossil fuel industry’s advertising and PR has been playing in preventing action on climate change, including the run up to last October’s “Build Back Better Act,” which after negotiations with legislative climate action opponents ended up scuttling most if not all of its climate change initiatives.

Noting that fossil fuel companies collectively paid nearly $56 million lobbying against the act, and paid for a “seven-figure ad buy spreading misinformation to kill” it, AOC went on to cite an expose by Gizmodo showing that in a 22-day period leading up to the “Build Back Better Act” vote, fossil fuel companies effectively bough most if not all of the advertising in Washington Beltway insider newsletters explicitly targeting lawmakers, including Politico’s, Axios’ and Punchbowl’s, before asking Cha to comment on its effect.

“One thing they do is mainstream their talking points,” Cha explained, adding, “They become very normal, even though what they’re saying is quite extreme. They regularly do a full page ad in The New York Times to make it seem like they’re doing what they need to be doing to make their climate targets, when in fact, we know it is the exact opposite. They’ve also done things like making it seem they are in favor of carbon taxes, even though they lobby against them.

“What they’re trying to do is mainstream and normalize their behavior so that people don’t think what they’re doing is so destructive.”

During both Wednesday’s and Thursday’s oversight committee hearings, opponents to climate action legislation argued that there was nothing wrong with the fossil fuel industry’s use of PR, advertising, lobbying and even clandestine “astroturfing” tactics (creating fake organizations or using fake social media accounts to spread disinformation about their role in climate change) as being part of their First Amendment rights.

Personally, I found that defense a weak one, because a) the issue isn’t about individual’s rights to free speech, but commercial free speech, and more significantly b) that the Federal Trade Commission Act prohibits false advertising claims.

Lastly, while the fossil fuel regulatory opponents argued the advocates want to prevent the industry from using advertising and PR to promote itself, a witness at Wednesday’s hearing articulated the advocacy goal best:

“Rules around disclosure is what needs to happen,” said Generous Ventures Founder and CEO Christine Arena.

Arena, who was top exec at PR firm Edelman working on fossil fuel company accounts before becoming a climate action advocate, continued: “Most of these ads don’t contain blatant lies. They contain a blend of factual omissions and distortions. So it’s incumbent upon agencies to be familiar with climate delay frames, how greenwashing works, to be able to evaluate it.”

Among other things, she said the American people have a right to know who is paying for “third-party” groups hired to “astroturf” and/or disrupt climate action advocacy. 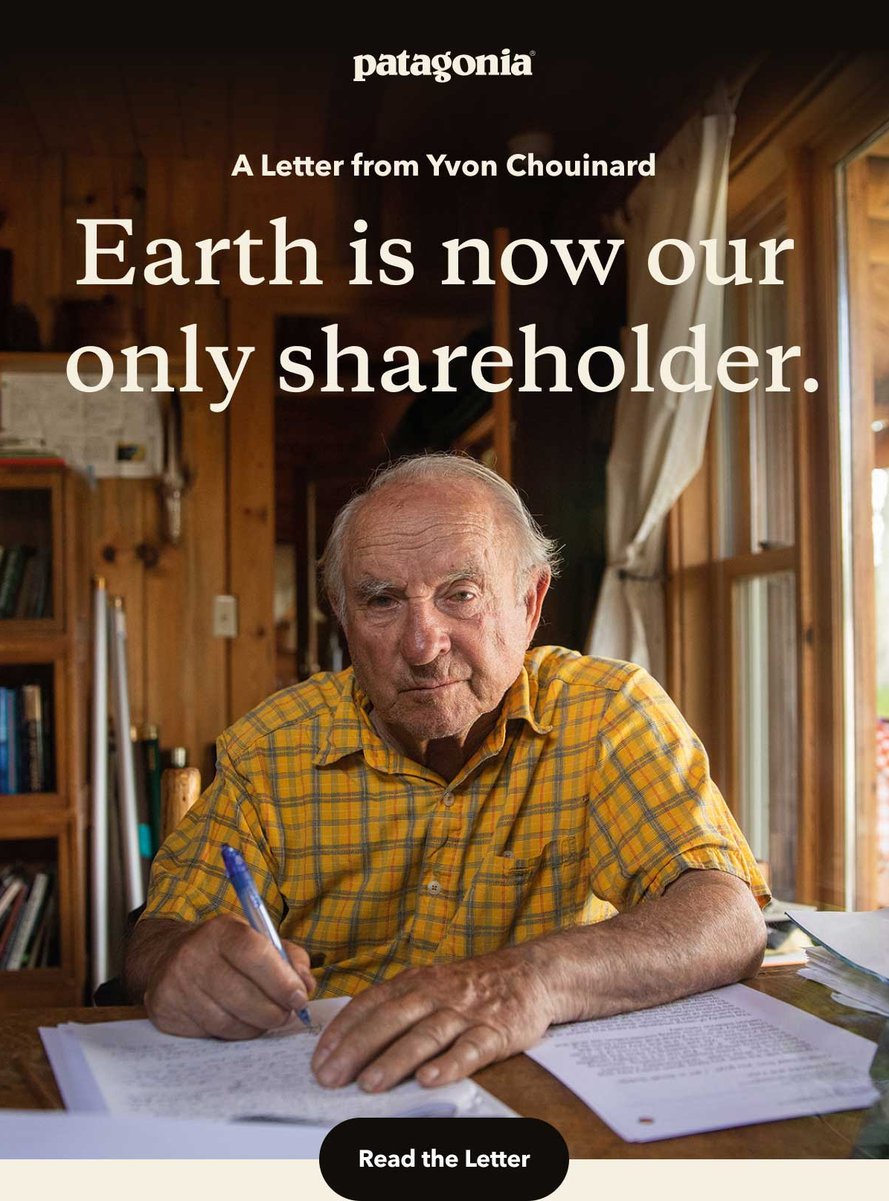