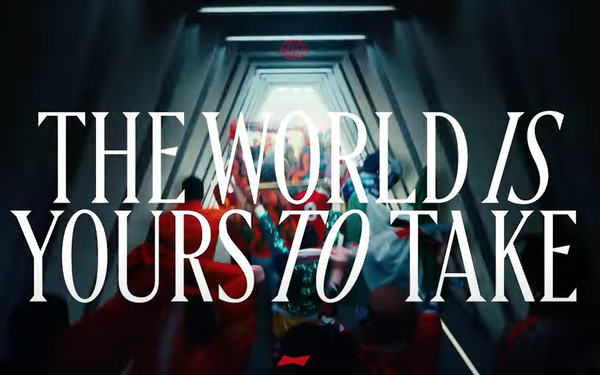 Budweiser is combining nostalgia and sports in a FIFA World Cup campaign the brand describes as the “most ambitious” in its 146-year history.

“The World Is Yours To Take” is running in more than 70 countries and includes QR codes on Budweiser cans and aluminum bottles in the United States that activate entries for free tickets to the World Cup in Qatar.

The nostalgia emerges at the opening of this spot from Wieden+Kennedy in which international football stars Lionel Messi, Neymar da Silva Santos Junior and Raheem Sterling inspire fans to chase their own dreams to the tune of the 1980’s hit “Everybody Wants To Rule The World.”

As Tears For Fears sings “Welcome to your life, there’s no turning back” the footballers—together with a horde of fans—run through a tunnel that leads to the playing field as the words “No matter your tunnel the world is yours to take” are superimposed on the screen.

“The song was selected because of its anthemic nature. As an iconic smash hit, it still transcends culture and generations,” a Budweiser rep tells Marketing Daily.

“The original music video for the song organically included Budweiser, so the connection was natural!” the rep adds in a reference to the beer’s label showing up briefly in the video.

Red and gold Budweiser packaging through the end of the year include the FIFA World Cup trophy and a QR code that links to a dedicated website. In addition to all-expenses-paid tickets to the final game on Dec. 18, entries can yield a variety of merchandise.

Budweiser is the official beer sponsor of the FIFA World Cup, which is taking place in the Arab world for the first time.