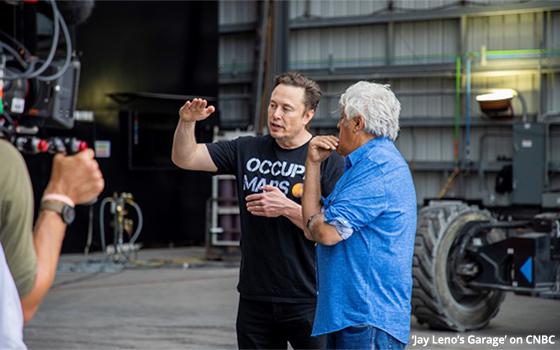 The tour will be seen on “Jay Leno's Garage” Wednesday night on CNBC. It may be the most revealing look at SpaceX that has yet been seen on TV.

Indeed, the one-hour show, which the TV Blog previewed earlier this week, devotes at least half its length (or more) to Leno's visit to SpaceX.

“Elon” and “Leno” are anagrams of each other, and the two seem to have bonded over Leno's love of cars and Musk's innovations in electric vehicles.

This week's episode of “Jay Leno's Garage” is Musk's third appearance on the show, but the first one in which cars are not the focus.

Instead, this show is all about engines and other mechanical issues as they relate to rockets and space travel.

It is also about Musk's ambition to mass produce a reusable rocket that can be launched, then landed on Mars, and then capable of returning to Earth and landing right side up on the same pad from which it took off.

The SpaceX manufacturing and test facility occupies 100 acres on the western shore of the Gulf of Mexico near Brownsville, Texas.

The complex has 500 employees, many (if not all) of whom live in a nearby village built by the company.

Musk, considered to be the wealthiest man in the world, told Leno he spends about half a year there, living in one of the cottages the company built.

“We needed a place that was out of the way ’cause these are giant rockets and they sometimes explode,” Musk said matter-of-factly.

“So it needed to be a remote location and it also needed to be on the ocean or on the sea southward and facing east so when you launch eastward, you take advantage of the Earth's rotation to get to orbit. And you wanna launch over the water in case something goes wrong and you don't land rocket debris on people.”

As Leno remarks at one point during the show (which the TV Blog previewed this week), Elon Musk thinks big.

“And if so, we need to be a multi-planet species,” says Musk, who wears an “Occupy Mars” t-shirt throughout the segment. “That's the next step. And then we can go from there to being a multi-stellar species.”

Musk even outlines what the world will need in terms of hardware to get colonists to Mars in sufficient numbers to establish and sustain a community there. And what is his “sufficient number”? A minimum of a million people.

In the Leno show, Musk explains how this will occur. Among other challenges, Musk said flights to Mars can only be undertaken every two years.

“Every two years, Earth and Mars are aligned to allow the shortest route between them,” he says. This is why SpaceX has to have thousands of huge rockets ready to go at the correct alignment times.

His calculus is complicated, but if the TV Blog understands it correctly, it goes like this: At the appropriate two-year windows, he would like to launch 1,000 Starships (or some subsequent generation of rocket) each containing 100 people, or 100,000 people sent to Mars every two years.

According to this vision, Mars would be populated by a million people in 20 years. “It’s probably what you need to create a self-sustaining city on Mars,” he theorizes.

Already an expert in engines and mechanics, Leno holds his own in his conversation with Musk about engine power and thrust, fuel needs and other subjects.

In fact, the discussion gets complicated, but Leno explains some of the fine points accompanied by graphics that are easy to interpret.

The TV Blog does not write often on “Jay Leno’s Garage,” but Elon Musk is a compelling figure. He is the kind of person who comes along maybe once or twice in a generation to change the world.

Like him or not, Elon Musk is a visionary whose ideas such as colonizing Mars with a million people seem unattainable to most of us.

But we are mere mortals, and we don’t think like him.

How big does Elon Musk think? Leno provides an answer in an anecdote he shares with Musk.