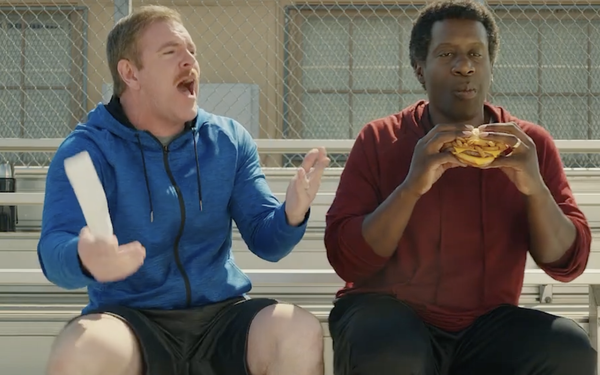 Sonic Drive-In is breaking a new campaign today that focuses on craveable food that you can only find at Sonic -- and the mini-escape from reality that a visit to the drive-through brings.

The campaign, via Mother, Los Angeles, introduces a new tagline, “MMM. Sonic,” which replaces “This is how we Sonic,” which launched in February 2020. Sonic says the tagline brings the brand into a more imaginative, creative place with spots that “blend beautifully designed sets, lyrical music, and an imaginative energy that showcases the fun, light-hearted brand identity of Sonic."

An inaugural ad shows a man sitting on the bleachers of a high school stadium. “You spend your day watching your kid’s big game. At least one of you is having fun,” according to a song that plays as the father waves to his son. The man then daydreams about the Sonic Chophouse Cheeseburger, a burger with crispy onions, cheese and a brioche bun. The man continues daydreaming and then has the cheeseburger in his mouth. But the ad ends with the man moving a little bit aside because, as the song explains, “Kevin’s dad doesn’t understand boundaries.”

The ads are a break from the previous campaign, which was unscripted and featured conversations between people in their cars at drive-in locations. “This is a new era for Sonic -- one where we can unabashedly claim who we are and take credit for our innovative menu offerings and the Sonic experience that you can’t find anywhere else,” said Lori Abou Habib, chief marketing officer.

While the pandemic has been a challenge for most fast feeders, Sonic increased sales by $1 billion in 2020.