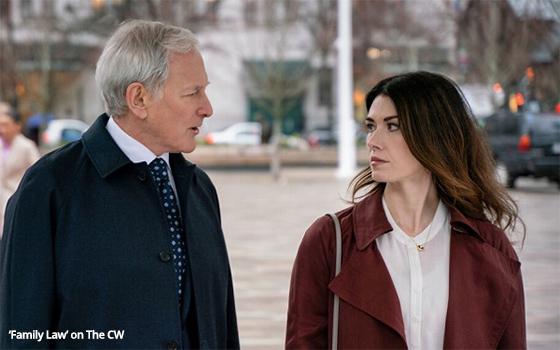 In a new legal drama coming to The CW Sunday night, a parent and an estranged offspring are thrown together in the same workplace when the parent reluctantly hires the adult child.

If this sounds like the premise for the new CBS drama “So Help Me Todd” reviewed here just yesterday, then that is because this similarity between the two shows is inescapable.

In the new CW show called “Family Law,” Victor Garber stars as Harry Svensson, the high-powered head of his own small law firm in Vancouver that specializes in family law.

The show’s title has a double meaning. Not only does it refer to the firm’s specialty, but it also refers to the family make-up of at least part of the firm.

Harry’s grown son works there as an associate attorney, and a grown daughter is employed there as an in-house psychologist who is on hand to provide support and counsel to the parties in these sensitive family lawsuits.

Into this maelstrom of family law and relationships steps another grown child, Abby (played by Jewel Staite, pictured above with Victor Garber).

She is also an accomplished attorney. She is fiercely independent and has never worked in her father’s family law firm because of his past history.

He walked out on her mother when Abby was a child, and father and daughter have been estranged ever since.

But now, she needs a job because she is just coming back from a three-month suspension of her license to practice law.

The suspension stems from her ongoing alcoholism and an incident in which she was so hungover in court one morning that she suddenly vomited all over her client’s nice suit. So, with nowhere else to go, Dad hires her.

Can this father and his wayward daughter work together without driving each other crazy? Cue “The Odd Couple” TV theme music.

If that paragraph sounds familiar, then that means you must have read yesterday’s TV Blog about “So Help Me Todd” in which the same sentences appeared practically word for word.

That show, premiering Thursday night on CBS, had a high-powered lawyer mom hiring her estranged, down-on-his-luck son as a private investigator in her law firm.

And like the lawyer daughter in “Family Law,” the unorthodox, fiercely independent detective son in “So Help Me Todd” is coming back from a license suspension of his own -- his private investigator’s license.

Of the two shows, “Family Law” comes out ahead. In the pilots for both shows, we get the lowdown on both families -- their estrangements, past histories and other issues that sometimes get between family members.

“Family Law” provides its backstories in ways that feel a lot more organic than the way this information is delivered in “So Help Me Todd.”

While watching the pilot episode of “Family Law,” information on these family relationships came so naturally through the family members’ words and deeds that I was barely aware of it.

As noted yesterday, “So Help Me Todd” hits you so hard over the head with its issues and conflicts that at one point while watching the pilot I actually begged it to stop.

The opposite was true while watching “Family Law.” In a single episode, the show got all of its backstories out of the way and even managed to fit in a heartfelt family court case.

When the show was over after its approximately 45-minute running time (without commercials), it felt neither short nor overlong. Instead, like the proverbial bowl of porridge in the story of the Three Bears, it was just right.