Surprise! This Ad Is Not What You Think 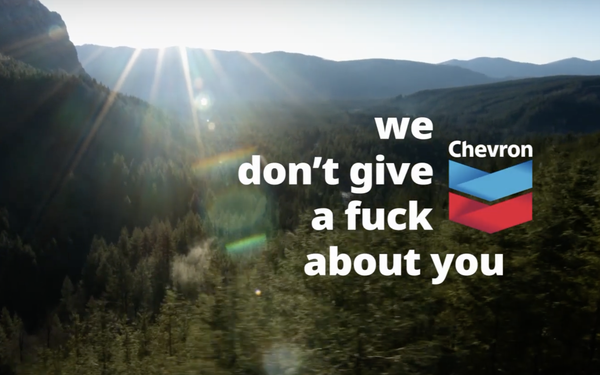 Shots of nature—fish swarming coral, a hummingbird feeding on a flower—are interspersed with a kid on a backyard slide and kids riding a shopping cart through a parking garage—in this fake Chevron ad. But the narration in this ad reveals its true goal:

“We at Chevron believe that nothing is more precious than life. And the most precious life of all is the dead kind that has been compressed for hundreds of millions of years under massive rocks until it magically becomes oil. Oil that we can refine and sell as gasoline. So a cool-ass tank can crush a clay hut or an airplane can take a businessman 3,000 miles to have dinner with someone, or whatever…”

The visuals continue with balloons being released into the sky. “All the while releasing greenhouse gases that are transforming the planet right this second into a hellish George Miller film. Because at the end of the day, we at Chevron straight up don’t give a single fuck about you, your weird children or your stupid, ratty-assed dog.”

The narration continues, adding that Chevron has billions of dollars to spend on commercial time so that you, the viewer, will be lulled into a catatonic state that makes you forget one fact: that Chevron is actively murdering you.

This parody of greenwashing ads was created by Adam McKay, the former “Saturday Night Live” head writer and director of “Anchorman,” “The Big Short” and “Don’t Look Up.”