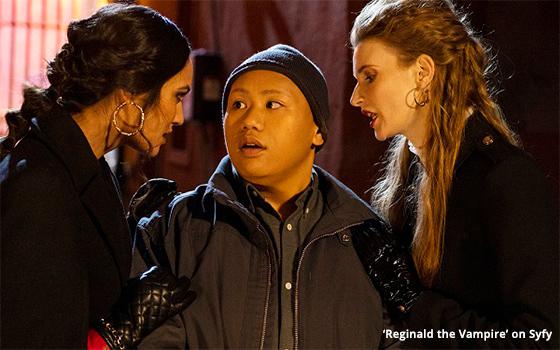 A reluctant, accidental vampire learns that he must now live for an eternity with the same problems he lived with as a mortal for the first 20-something years of his life.

In other words, in this new TV take on the subject of vampires, when one becomes a vampire, he or she retains much of the same physical and emotional issues from their days as a mere mortal.

Where the new Syfy series “Reginald the Vampire” is concerned, Reginald is a well-meaning, gentle, socially awkward, shy guy who also happens to be fat, which is something that he is bullied for.

These are not exactly character traits that we would never associate with a vampire following about a hundred years (or more) of movies and TV shows about these blood-sucking denizens of the dark.

Do not attack me for using the word “fat” here. It happens to be used a lot in the show, much of the time by Reginald himself.

Moreover, this new series is based on a series of novels literally called “Fat Vampire” by Johnny B. Truant.

In the title role, Jacob Batalon (pictured above being menaced by two vampiresses) is just perfect. When he transforms into a vampire, he is still basically the same guy.

But the problem now is, his life is arguably worse because he now has a craving for human blood. He is troubled (to say the least) by the fact that he now looks upon every mortal he meets as a potential provider of his dinner.

This includes the ordinary people who occupy his orbit, such as the young woman co-worker he wishes to date.

Only now, he cannot stop fixating hungrily on her throbbing carotid arteries every time he sees her.

Such are the conflicts of a regular guy who becomes a vampire more or less by accident in a manner that the TV Blog wishes not to spoil.

Now that he is one, the question becomes: Now what? The answer to this question begins to take shape in Episode One of “Reginald the Vampire,” which premieres Wednesday night at 10 p.m. Eastern on Syfy.

This show is another in a lengthening list of Syfy shows that take a partly serious and partly light-hearted approach to their sometimes-bloody subject matter.

Others on the Syfy playlist include “Resident Alien,” “Chucky” and “Astrid & Lilly Save the World.”

With these shows and “Reginald the Vampire,” Syfy has found a consistent voice for its original content that defines the network’s brand so well that it is often possible to identify a Syfy show with just a glance.

As for the continuing and never-ending saga of vampires on TV, “Reginald” is one of at least three vampire series this month.

The others are the new “Interview With the Vampire, which premiered earlier this week on AMC, and the upcoming “Let the Right One In” starting on Showtime this Sunday.

“Reginald the Vampire” premieres on Wednesday (October 5) at 10 p.m. on Eastern on Syfy.