Read All About It: Hilary Swank In Alaska Newspaper Drama 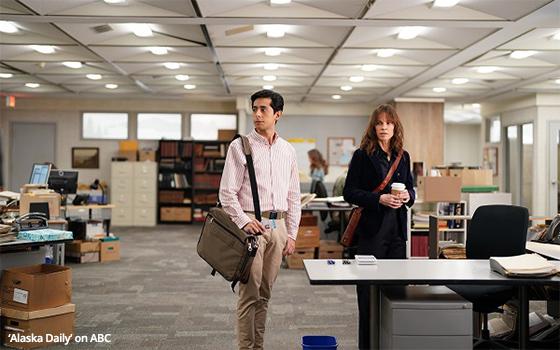 Swashbuckling New York-based reporter Eileen Fitzgerald gets herself transferred to a daily newspaper in Alaska after a career meltdown, and in the blink of eye, she receives her first death threat and finds a cool guy to sleep with.

Clearly, Ms. Fitzgerald (played by Hilary Swank) is a journalistic force to be reckoned with, whether in New York, Anchorage or even Shanghai, where we first meet her at the outset of the new ABC newspaper series called “Alaska Daily,” premiering Thursday night.

It doesn’t take a genius to guess that she was not in Shanghai on an assignment from The Daily Alaskan, the fictional newspaper where she winds up four months after her career takes a nosedive.

To her, accepting a job in Anchorage is like being consigned to the minor leagues after strutting her stuff for a New York-based news website called Vanguard.

Reading the synopsis for this show before watching the pilot this week, I predicted wrongly that the show would treat this Anchorage newspaper as small potatoes and its staff as hicks and rubes.

This turned out not to be the case. On the contrary, the show honors, respects and pays homage to the toiling of local-market journalists who do the work of day-to-day newspapering today in the face of dwindling circulation, financial reverses and staff downsizing.

At first, it is Ms. Fitzgerald who looks down her nose at The Daily Alaskan, even though she is the one who accepted an offer from the editor.

It was an offer she could not refuse because her career had gone off the rails after she was fired for bungling the Shanghai story, and also because she was a workplace bully.

She has a superiority complex that she brings with her to Anchorage. In the pilot of “Alaska Daily,” she does indeed take the young reporters at The Daily Alaskan to journalism school.

But even in the pilot, it is evident that her new surroundings and co-workers are getting under her skin.

She even meets a handsome man at a local bar who turns out to be a bush pilot and a poet. Try finding a guy like that in New York!

As for the death threat she receives after just a few days on the job, this has to do with the story she was brought to Anchorage to dig into -- a series of deaths of young women, all indigenous, whose deaths were barely investigated by local and state law enforcement agencies.

“Alaska Daily” performs the sometimes difficult task of getting its newspaper details exactly right. The newsroom set looks and feels like the real thing, and so do the people who populate it, right down to the paper’s very unwelcoming receptionist.

One of the reason the show works so well is the presence of two-time Oscar winner Hilary Swank, 48. Due to her talent and charisma, she rivets the eye in every scene she’s in. She is also one of the show’s executive producers.