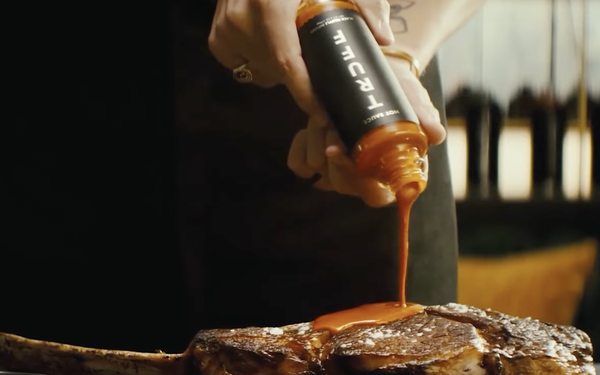 Hot-sauce brand Truff is taking to television for the first time since its launch in 2017 with campaign creative that mimics that familiar moment when a waiter asks a diner to “just say when.”

That response never comes in this “You Can’t Get Enough Truff” spot filmed in the V Restaurant in downtown Los Angeles by the Fox Den agency and director David Ma.

As the waiter proceeds to pour Truff sauce on a bone-in, ribeye steak, he says “Just say when.”

Having started as a digitally native brand, Truff doubled its brick-and-mortar presence in the past year to more than 15,000 doors—including Kroger, Costco, Publix and Target, according to Executive Vice President of Ecommerce Calvin Lammers.

With the TV campaign, “Now we’re in front of a much larger audience that hasn’t heard of us,” Lammers tells Marketing Daily.

“A big part of this commercial is. we want to make the masses hungry—and we also want to make them laugh and give them something they can relate to,” adds Michelle Gabe, director of marketing.

“No matter who you are as a shopper or your age demographic, everyone’s been in this situation.”

One of Truff’s primary content efforts has been the “What The Truff?!” long-form YouTube cooking show, consisting of 10-minute episodes featuring such celebrities as musician deadmau5, actor Cody Christian (“All American," “Teen Wolf”) and actor Jaleel White (“Family Matters”).

“What’s unique about What The Truff is that all of the celebrities that are on it are not being paid to do it,” says Gabe. “They’re just personal fans and friends of the brand.”