A Netflix First: 'Knives Out' Sequel Will Run In 3 Major Theater Chains Before Streaming 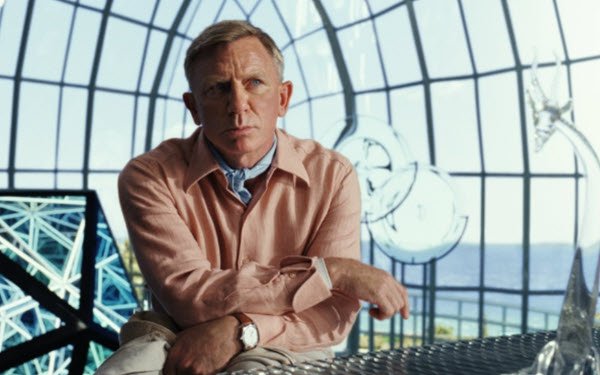 In a first for Netflix, the “Knives Out” sequel will have a ‘sneak-peek” run in all three major theater chains before debuting on the streaming service.

Netflix announced that AMC, Regal Cinemas and Cinemark will have an exclusive, one-week run of “Glass Onion: A Knives Out Mystery” starting Nov. 23, before the movie starts streaming a month later, on Dec. 23.

The movie, directed by Rian Johnson, will also play in “select” U.S. theaters, bringing the total of domestic locations to about 600. In addition, it will be shown internationally in theaters in Canada, the U.K., Ireland, Italy, Germany, Spain, Israel, Australia and New Zealand.

While that is less extensive than a traditional wide release, which typically includes 3,000 or more North American theaters, the deal represents a potentially important compromise between Netflix and exhibitors, and AMC in particular.

Netflix has run some movies — including “The Irishman” and “Roma” — in some chain theaters prior to their streaming premiers. But  up to now, AMC had refused to run Netflix titles because Netflix did not want to build in what AMC considered sufficient time between a title’s theatrical and streaming releases.

The “Onion Glass” deal “sufficiently respects the sanctity of our current  theatrical window policy,” AMC Chairman and CEO Adam Aron said in a statement. “We are hopeful that a successful screening in our theaters this Thanksgiving will lead to more cooperation between Netflix and AMC in the months and years ahead.”

“As we have often said, we believe that both theatrical exhibitors and streamers can continue to co-exist successfully,” Aron elaborated. “Beyond that, though, it has been our desire that we find a way to crack the code and synergistically work together. By doing so, theaters will make more money by having more titles to show, and thanks to the larger cultural resonance those movies can gain from a theatrical release, they will wind up playing to a wider audience when they also are viewed on streaming platforms.”

The cooperation on the “Knives Out” sequel — which again stars Daniel Craig (above) — was driven in no small part by the movie’s potential for strong box-office sales.

The original movie grossed more than $311 million worldwide, making it one of 2019’s biggest movies, and the sequel was well-received when it debuted last month at the Toronto International Film Festival.

“Given the excitement surrounding the premiere” at the festival, “we hope fans will enjoy this special theatrical event in celebration of the film’s global debut on Netflix in December,” stated Scott Stuber, head of Global Film at Netflix.

Although moviegoers have returned to theaters for a relatively few titles  — especially the continuing string of super-hero franchise flicks — exhibitors still need a big holiday season to help them recover from the pandemic.

And September brought bad news: Estimated box office receipts, per Comscore data, were the lowest for that month since 1996, at $328.7 million.