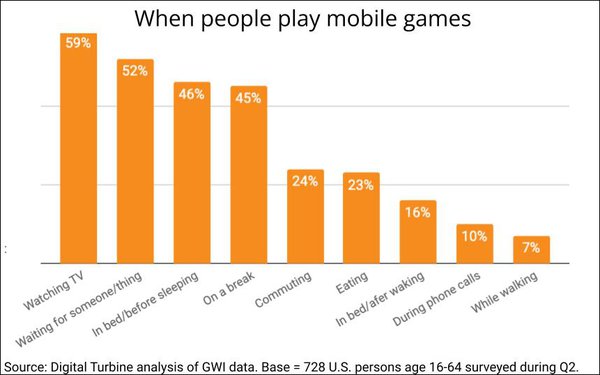 During the years of social media ascendancy I would sometimes write about a cynical description industry insiders had for popular social media games like Candy Crush, FarmVille and the ilk. They called them “time management devices,” because their goal was to get users hooked on idling their time so they could be monetized by advertising, premium upgrades, etc. Now, the same thing is true of mobile gamers, according to a new study Digital Turbine (DT) just handed me as an exclusive.

Not surprisingly, the study — DT’s 2022 “Mobile App Habit Report” — finds the chief reason mobile users play games on their phones is to idle time (see chart above). It’s not surprising, because “mobile” has become code for the new app-based “social” media world.

That’s because mobile has long since become the dominant way people access social media, including games. What does surprise me about the study — and the way I hear many talk about mobile users, especially mobile gamers — is that they are now also a form of demographic segmentation.

And by that, I mean much of the research being conducted about mobile gamers is intended to describe them as consumer segments so they can be targeted and marketed to efficiently. But in a broader sense, they are also becoming proxies for consumer segmentation overall.

And the reason for that is the advertising and media industry loves a winner, and whatever new medium is winning the day becomes the one the industry uses to filter and describe how consumers think and behave.

There’s another factor at play here, which I’ve also been writing a lot about lately: the concept of the media “line items” industry analysts use to think about the composition of the media universe. As I’ve been reporting, some of the best industry analysts – especially the team at GroupM’s Business Intelligence unit – have been doing a fair amount of soul-searching about how those line items should be defined and bucketed, because digital media has been blurring the way people use media (for example, YouTube is now the largest “audio” medium, and “retail” is now one of the biggest ad-supported media, etc.).

It may make sense to incessantly change the words and definitions we use to describe media – and media usage – but my big beef is that it is looking at media from the wrong end of the telescope: the advertising and media industry’s end. A better way, if you ask me, is to look at it from the end-users’ end. You know, the people who use it. Call them “mobile gamers,” or “users,” or “consumers,” if you want, but they actually are, well, people. 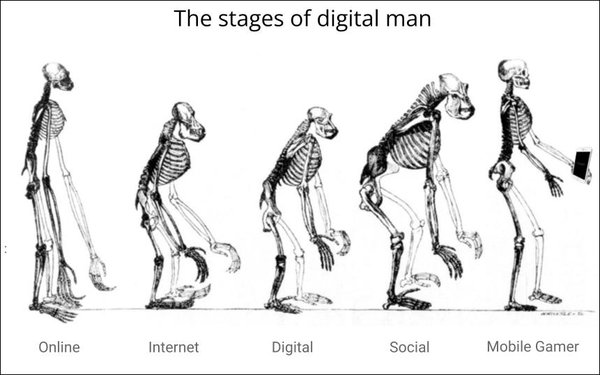