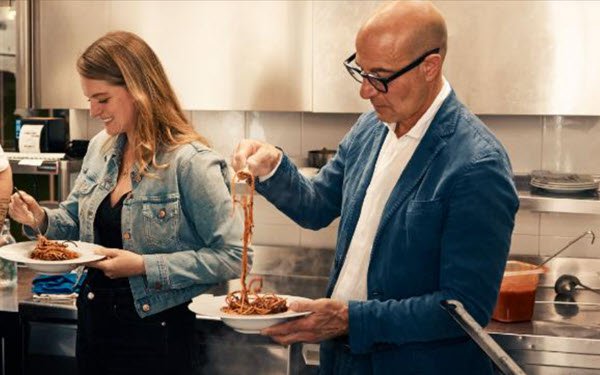 CNN’s many well-regarded documentaries and films have included “RGB,” “The Burning of Black Wall Street” and “The Murdochs: Empire of Influence.” Its popular series have included  "Anthony Bourdain: Parts Unknown,” Stanley Tucci’s “Searching for Italy” (above) and W. Kamau Bell’s “United States of America.”

The original content is credited with having broadened CNN’s audience and attracted sponsors, including Allstate and Eli Lilly & Co.

In his note to employees, Licht said the “difficult” content decision is based in large part on “the ever-increasing cost of commissioning third-party premium content.”

The focus will instead shift to producing longform content, which will remain “an important pillar of our programming,” he said.

CNN will run six original series and films next year, including “See It Loud: The History of Black Television,” from LeBron James and Maverick Carter’s SpringHill Company, and “American Pain,” a documentary about the opioid crisis.

But Amy Entelis, who oversees CNN’s original programming, has been charged with identifying new ways to “approach longform content in house,” Licht wrote. “My goal is to find a model that will enable us to bring our audiences this type of programming with greater flexibility.”

Other WBD units that produce documentaries and other original content include HBO, Discovery Channel and ID.

Last week, Licht told CNN employees that budget cuts are coming by year-end, and suggested that layoffs were also coming.

When it was formed by Discovery Inc.’s acquisition of WarnerMedia earlier this year, WBD promised investors that it would cut $3 billlion in costs. Last week, the company disclosed to the SEC that it expects to spend $1 billion to $1.5 billion to discontinue already commissioned programming, and likely take $4 billion in pretax charges through year-end, including $2 billion related to cutbacks on new and back-catalog titles.
Next story loading