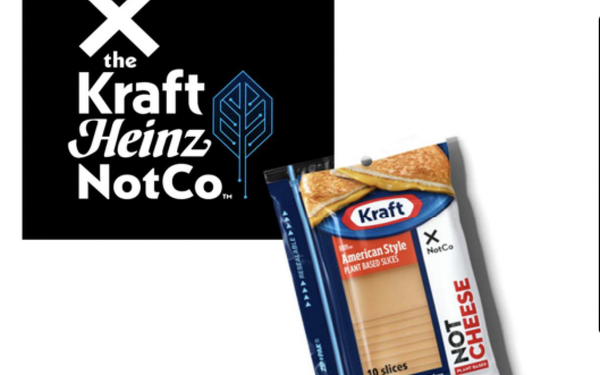 The news was revealed last week by Kraft Heinz CEO Miguel Patricio during an earnings call with financial analysts.

“We achieved this with record speed and using our agile ways of working, we created a superior consumer offering by combining the power of our brands and NotCo’s unique artificial intelligence technology,” said Patricio.

Founded in Chile in 2015, NotCo uses an AI system named Giuseppe to determine how to combine various plants with the goal of replicating the flavor and texture of animal products.

As reported by Bloomberg, NotCheese will be available in early November in about 30 Giant Eagle stores in the Cleveland area—with a national rollout planned for next year.

The joint venture with Kraft Heinz is also developing plant-based mayonnaise, according to Bloomberg.

NotMayo was NotCo’s first product in Chile, where it also sells NotIceCream.

Marking NotCo’s debut in the cheese category, NotCheese slices will be available in American, provolone and cheddar varieties.

In February, Kraft Heinz and NotCo came together under the banner of The Kraft Heinz Not Company LLC.

After the joint venture was announced, Kraft Heinz U.S. president Carlos Abrams-Rivera hinted at another product option in an interview with CNBC.

“Now we will have the advantage of bringing the products you love from the brands you trust also with a plant-based option,” said Abrams-Rivera.

“It’s thinking about whether you have Oscar Mayer hot dogs and Oscar Mayer Not Hot Dogs.”