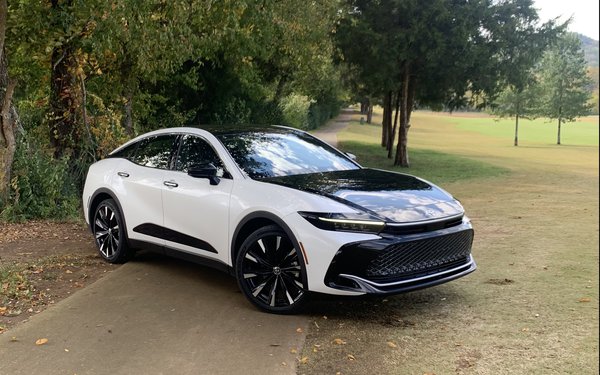 Toyota Motor North America is preparing to introduce a new sedan with an old name.

With the 2023 Toyota Crown, the automaker is bringing back to the U.S. a nameplate that disappeared in the 1970s, but has continued to be sold overseas.

While SUVs have come to dominate the market, Toyota clearly sees a market for sedans, says Joe Moses, general manager of Toyota marketing.

But not any old sedan. This vehicle, arriving at dealers in early 2023, is a crossover that includes attributes of several vehicle styles.

This prompted discussions at Toyota about how to position the vehicle in the marketplace. Is it a car-like SUV, or an SUV-like car? Maybe a little of both?

“At its core, this is going to appeal to the people who love sedans,” Moses tells DriveTime.

In its upcoming marketing, Toyota will target early empty-nesters and drivers who are switching back to sedans from SUVs, he says.

A recent test drive revealed the car indeed has many of the best properties of a luxury sedan, a sports car and an SUV.

It is powerful and nimble, hugging the road on tight corners, but also quiet, with a noticeable reduction of noise, vibration and harshness giving it a luxury feel.

Another bell (or whistle): Toyota’s all-new audio multimedia system, with 12.3-inch touchscreen, is now standard. With a smart-phone-like feel, it is intuitive to use.

The Platinum edition will offer a bi-tone paint pairing, with black paint that extends from tip to tail, and a choice of Oxygen White, Heavy Metal, Supersonic Red or an all-new, bi-tone-only Bronze Age color.

Color-blocking on the side profile accentuates the car’s more narrow midsection, which flows to a broad rear end. The dynamic body style is amplified by rounded and sweeping character lines that give it a launch-ready, head-turning look.

All editions will come standard with all-wheel drive, which drivers of SUVs have come to expect.  A hybrid powertrain also is standard, with choice of the first-ever Hybrid MAX or Toyota Hybrid System.

The car has an elevated stance that comes in part from standard 19-inch or available 21-inch wheels -- the largest ever on a Toyota sedan. The large diameter wheels lift the Toyota Crown up, giving the car a strong presence that also helps drivers get a clear view of the road, another SUV feature now carried over to a sedan.

The height also elevates the vehicle’s hip point, the pivot point between the torso and upper legs, measuring at about 25 inches and enabling easy vehicle entry and exit.

Standard on the Platinum grade is Toyota’s Advanced Park System. Sensors identify an open parking space. Then, once selected by the driver, the system controls steering, shifting, acceleration and braking for hands-free parallel or reverse/forward perpendicular parking.

During a test drive, the system performed well, quickly backing the car into a fairly narrow space. Like many semiautonomous features, it might take some drivers (especially those with control issues) a bit of time to get used to the system and trust its accuracy.

Also new is Proactive Driving Assist. When operating conditions are met, this system provides gentle braking and/or steering to help support driving tasks such as distance control between your vehicle and a preceding vehicle, pedestrian or bicyclist.

Bottom line, this vehicle packs a lot of technology and styling into a fairly affordable package. No matter what Toyota calls it, it's bound to be popular.