Backstreet Boys Tell You Why You Need Downy Rinse & Refresh 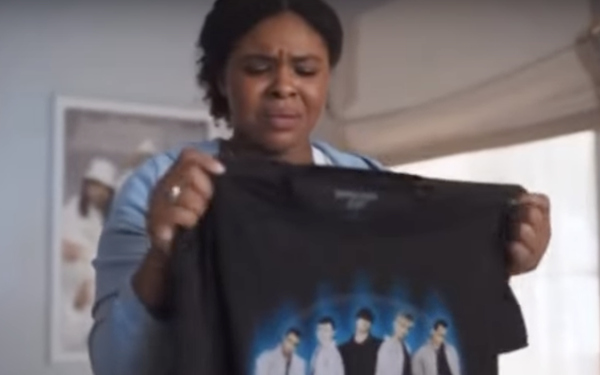 As this spot from Saatchi & Saatchi opens, a woman sniffs a Backstreet Boys T-shirt and tells herself “You gotta get rid of this.”

Cue the Backstreet Boys, whose faces come alive behind her in a framed poster.

Their first verse begins with “Tell me why”—a nod to their classic hit “I Want It That Way.”

Her response: “’Cause it stinks.”

The boys keep asking the same question before veering from inspirational to instructional by suggesting she try Downy Rinse & Refresh.

When Procter & Gamble introduced the product in September, the company described it as its “biggest innovation in over 30 years”—which just about coincides with the formation of the Backstreet Boys in 1993.

The band is currently on a multicountry tour that includes gigs in several U.S. cities.

According to Saatchi & Saatchi, Backstreet Boys were the brand’s first choice for talent in the commercial because they blend reminiscence and mainstream relevance.

“We wanted a group that could have presence beyond nostalgia. With them we can reach multiple generations,” Saatchi & Saatchi New York chief creative officer Daniel Lobatón tells Marketing Daily.

“Our written script had the Backstreet Boys reading the Downy product description. But when they got on set, they started singing the description instead. We knew at that moment we needed to pivot. It was better than anything we could’ve written.”