72% Say There Are Too Many Subscription Services, TV/Streamers Missing Bundled Platform Opp 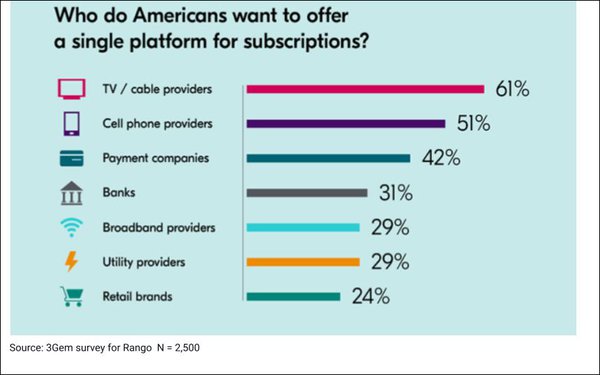 Nearly three-quarters (72%) of U.S. subscription users feel that there are “too many” such services available today, according to a survey of 2,500 U.S. subscription holders conducted for UK-based payments platform Bango by research firm 3Gem.

Fully 78% of U.S. subscribers say they would like a consolidated platform to manage subscriptions across video/TV streaming, music, gaming, fitness and other areas, and 77% want to be able to pay for multiple subs in a centralized fashion.

Particularly given that TV/streaming services are the type most-subscribed to, they could potentially reap major retention and customer growth benefits if they solved the ongoing inconvenience and friction caused by fragmented subscriptions management by offering integrated platforms. 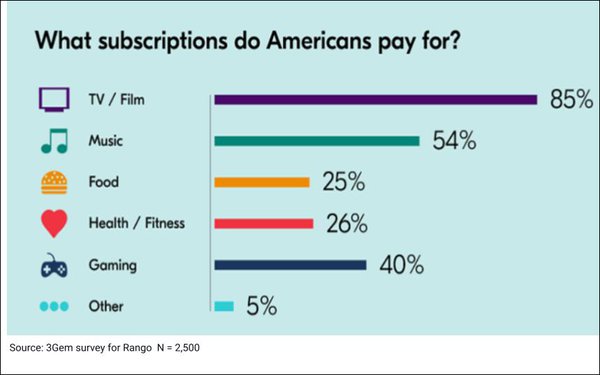 Further, asked what types of companies should be the ones to offer integrated platforms, TV/cable companies lead (graphic top of page), followed by cell phone providers and payment companies — although between a quarter and a third say they would trust their banks, broadband providers or big retailers like Walmart, Target and Best Buy to manage their services.

Nearly three quarters (71%) of consumers also say they would spend more time using subscriptions if centralized management platforms were offered. Further, despite the “too many” complaint, 62% claim that they would actually sign up for more subscriptions if such centralized “superbundles” were available. Oddly, 39% think that piracy is the best way to access everything they want in one place.

Moreover, 79% said they believe they would be more loyal to a company that provided such an integrated service for them, and 58% said they would leave their current TV, mobile or broadband provider if such a service were offered elsewhere.

But as things now stand, two-thirds (65%) say they can’t afford to keep up all of their services, one-third (34%) say they pay for at least one subscription that they never use, 45% say it is too hard to keep track of subscriptions, and 35% don’t know how much they’re spending on them. 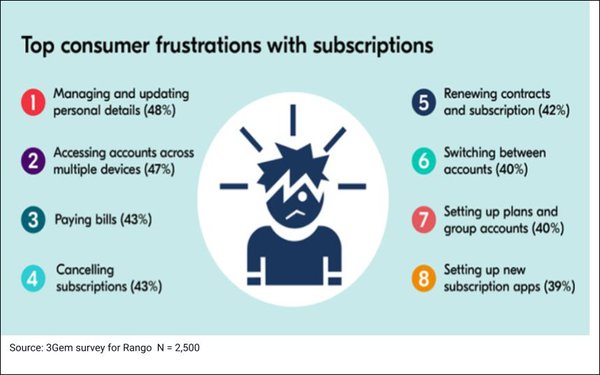 Subscriptions management integration “represents a major opportunity” for TV and streaming brands and the other likely candidates, points out Bango, in its report. “Over the next few years, these industries and brands will be well-placed to take ownership of the subscription economy by building the flexible superbundles that consumers really want. Those that act fastest will gain first-mover advantage.”

Some movement is already happening — for instance, Apple’s integration of its own services via Apple One, Verizon’s +play in the U.S., and Australia’s Optus SubHub, which brings together Netflix, Amazon Prime Video, Paramount+, Calm and even Kindle.

Bango, meanwhile, is promoting its version of third-party “offers on demand” technology, which enables payment relationships across hundreds of different subscription services, apps and streaming brands.