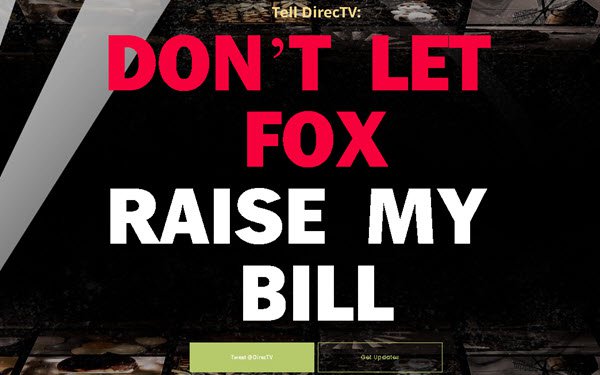 Media Matters for America, a liberal not-for-profit that monitors and challenges misinformation coming from conservative sources, has launched a campaign that aims to get DirecTV subscribers to pressure DirecTV not to accept cost hikes in its current carriage negotiations with Fox Corp.

On Nov. 27, Fox began warning DirecTV subscribers that they may lose access to Fox programming starting at midnight Pacific time on Friday, Dec. 2, when the companies’ distribution agreement is set to expire.

A blackout would block DirecTV, DirecTV Stream and U-verse customers’ access to Fox’s broadcast stations, FS1, FS2, Big Ten Network, Fox Deportes and Fox Soccer Plus for subscribers to DirecTV satellite, DirecTV Stream and U-Verse TV. That would mean losing access to the World Cup tournament, the Big Ten Championship game and the NFL, as well as Fox news and other broadcast programming.

In messaging to DirecTV subscribers, Fox accused DirecTV of demanding “unprecedented special treatment that represents a wholesale change to our longstading relationship and is out of step with marketplace terms.”

In response, DirecTV accused Fox of using “the same old, tired programmer scare tactics of putting customers into the middle of contract renewals” that it had invented “at the turn of the century,” and of having a “long, long history of aggravating consumers to help try to boost their guaranteed rates, while most renewals are typically resolved without any interruptions.”

Media Matters has inserted itself in the fray by creating a “No Fox Fee” microsite (screen grab above) that urges DirecTV subscribers to in turn urge DirecTV to resist accepting a Fox cost hike.

Media Matters says it made a six-figure online advertising buy to drive DirecTV subscribers and other consumers to the site, which provides a link to tweet at DirecTV, as well as an 800 number for the satellite and online pay-TV distributor.

“Fox is trying to force every DirecTV, DirecTV Stream, and U-verse customer to pay a lot more money for TV,” asserts the site’s copy. “Even if you never watch any Fox channel, your bill will be affected unless you take action now. Fox is threatening to turn off sports and other programming for DirecTV customers, unless DirecTV — and customers like you — pay an increased ‘Fox Fee.’”

“Fox Corp., the same Murdoch-run company behind Fox News, is up to dirty tricks yet again — trying to force DirecTV to raise rates on consumers, and holding sports channels hostage to do it,” Angelo Carusone, president of Media Matters, charges in the release announcing the campaign. “For years, the Murdochs have used heavy-handed and deceitful tactics to pit consumers against cable companies so that Fox Corp. can profit and resist any outside accountability. But that ends now. It’s time for the truth. And the truth is that Fox Corp. is trying to raise your bills and, ultimately, this money will be used to underwrite more hate from Fox News.”

Fox declined to comment on the Media Matters campaign.