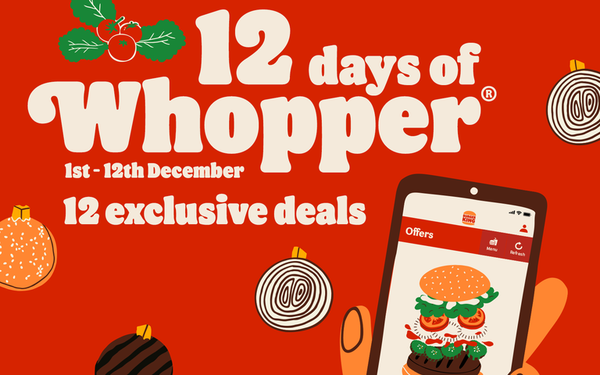 Burger King is bringing back its 12 Days of Christmas Deals promotion starting Dec. 6.

The deal is available through the Burger King app for members of Royal Perks, BK’s loyalty program, which is free to join.  Royal Perk members earn 10 crowns (redeemable for BK items) for every $1 spent.

The fast feeder also ran the promotion in 2019.

In 2018 “The 12 Days of Cheesemas” was a sweepstakes that gave away a 2019 Jeep Latitude and a trip for two to Bermuda, among other prizes. In 2020, the promo was Merry Fizzmas, a joint sweepstakes with Coca-Cola that dangled $25,000 along with 1,500 other prizes. Anyone who ordered a soft drink had the chance to play (hence the name).

McDonald’s, for its part, has launched a contest called the “SZN of Sharing,” that gives people who use its app the chance to buy exclusive clothing and win different prizes. Three winners will also get a McGold card, which offers two McDonald’s meals a week for the next 50 years.