Big Agency Ad Outlooks For Mobile: There Are None 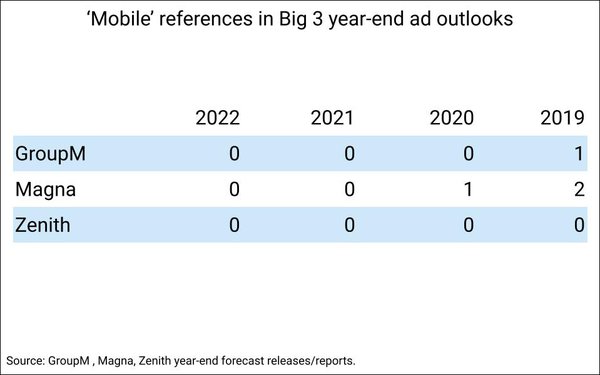 The good news in the year-end outlooks released this week by Madison Avenue's Big 3 agency forecasters is that, despite growing economic uncertainty, the ad economy remains resilient. The bad news is that there was no mention of "mobile" in any of them. I mean, literally, none of the forecasters even used the word.

That made me wonder, so I thumbed through the last several years of year-end outlooks released by WPP's GroupM, IPG Mediabrands' Magna, and Publicis' Zenith units, and found none of them mentioned mobile last year either.

The last time mobile was referenced was in 2020, when Magna still included a line item for mobile in its U.S. media growth estimates. It also did so in 2019. And GroupM had one mention about the impact of increasing mobile bandwidth on the overall advertising economy.

Obviously, this is not the first time I've written a column pointing out that the ad industry rarely ever talks about -- much less thinks about -- mobile as an advertising medium. But it's striking that it doesn't even talk about mobile technology as one of the factors influencing ad spending worldwide, or in the U.S.

Now you can argue that mobile is baked into other things the big agency economists are talking about -- things like the fast-growing new "line items" of "retail media" and "CTV," because that's how many consumers access and interact with those "channels."

But my point is that in a week when the biggest ad industry news is about the major agencies forecasts for the year ahead, mobile isn't even part of the conversation.

1 comment about "Big Agency Ad Outlooks For Mobile: There Are None".
Check to receive email when comments are posted.
Next story loading