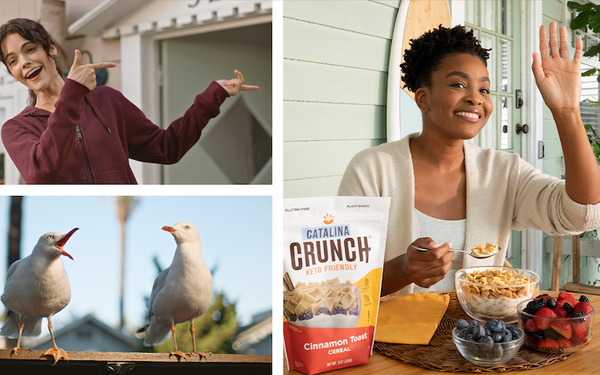 Keto-friendly cereal and snack brand Catalina Crunch is using humor in its first national television campaign to convince people that food can be simultaneously healthy and delicious.

In this spot from the SuperHeroes N.Y. agency, a day starts out quietly for a woman eating Catalina Crunch cereal on her porch—that is, until her neighbor walks outside and begins chirping to a pair of birds.

As the birds chirp back, the voiceover says, “The world is full of surprises—like getting cinnamon toast cereal without all the bad stuff.”

According to SuperHeroes managing director Susan Vugts, mirth is a way to offer something lacking in cereal aisles.

“We looked at the cereal category and saw how it was either a bit boring or the obvious—showing happy people eating cereal and living a fulfilling life,” Vugts tells Marketing Daily. “We always try to find an insight that connects with people and makes them want to stop scrolling and pay attention to it.”

Although Catalina Crunch describes itself as keto-friendly, company founder Krishna Kaliannan says the target audience goes beyond those on a keto diet.

“Keto has really become a word that’s short for several important things—like low or zero sugar, higher in protein. So keto is an effective way to communicate multiple things about a product quickly,” says Kaliannan.

“The number of folks who are doing the keto diet is not going up like it was in the past. We’re going after people who have a little bit more understanding of nutrition.”

After the brand’s launch in 2017, Catalina Crunch became the #1 cereal brand at Whole Foods stores and has since grown its brick-and-mortar distribution to more than 20,000 doors, according to Kaliannan.

The campaign will run on social media platforms along with connected and linear TV.