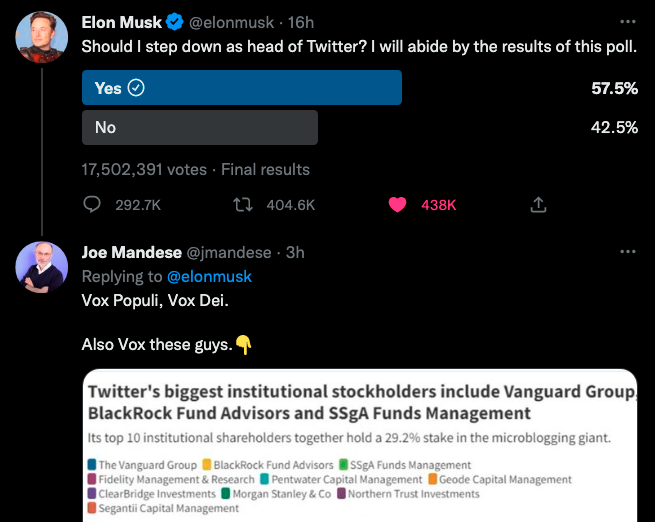 Less than two months after Elon Musk took control of a privately held Twitter, he is stepping down. Assuming he abides to the results of his own Twitter poll, the way he has with similar ones in the recent past (reinstating @realDonaldTrump's and other banned accounts).

At presstime this morning, Musk still had not invoked his "Vox Populi, Vox Dei" mantra, but if his other decision-making poll results are precedent, Musk is bound to do so shortly.

If/when he does, pundits will wax poetic about his decision, but I suspect that this one was less egalitarian and more pragmatic than the others, as Musk has reportedly been facing mounting pressure from Twitter's other largest shareholders -- the big institutional investors that are his creditors that backed his $44 billion acquisition of Twitter -- not to mention the ones at Tesla, and his other businesses that seem to have been floundering due to his preoccupation with Twitter's news cycle.

Whatever his motives and rationale are, when he does step down as the result of a popular vote -- albeit one staged on Twitter -- he will have accomplished at least one important thing for democracy.