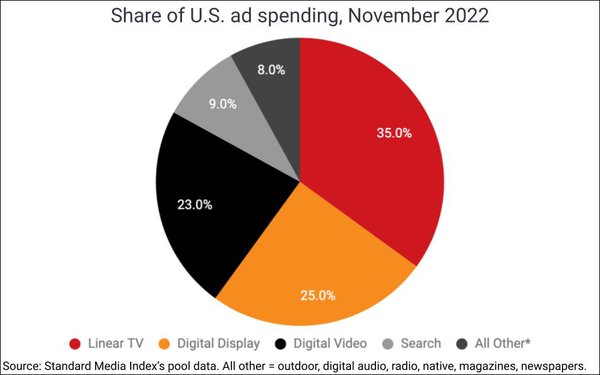 For the first time since July 2020, digital ad spending declined in November, according to new data from Standard Media Index (SMI).

The analysis, which is derived from SMI's pool of data of actual media buys made by the major agency holding companies and independent media-buying agencies, found overall digital ad spending contracted 1%.

The analysis also is the first from SMI to include new media breaks based on ad formats, and shows that a new break for "digital video" rose 7% in November, helping to offset digital's overall decline in November.

The data also shows linear TV ad spending fell 12%, driving the share of U.S. ad spending for the long-dominant medium to 35% vs. 23% for digital video, which includes any digital ad format running on websites, platforms or CTV apps and devices.

During their third quarter earnings call with analysts and investors, Meta executives did single out an underwhelming ad marketplace response to their push to make Facebook and Instagram "Reels" a premium video advertising unit, some observers believe they may have saturated the market with too much supply of video inventory to quickly, especially given its timing with an overall economic downturn.

"[Total digital ad spending] was down 1%," McCurnin noted, adding, "but digital video helped offset that as a lot of these other channels receded."

McCurnin called digital video's performance a "bright spot" for November, which fell 7% overall, though she also noted it compares with record ad spending in November 2021, which was the first month ever to top $4 billion in U.S. ad spending.

The data also reveals that digital "native" advertising formats account for a 1% share of total U.S. ad spending, but declined 16% year-over-year in November. 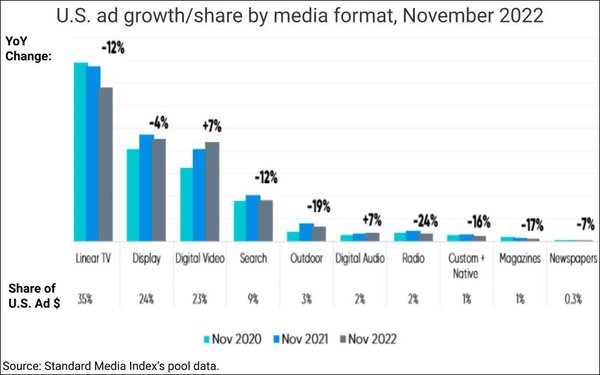