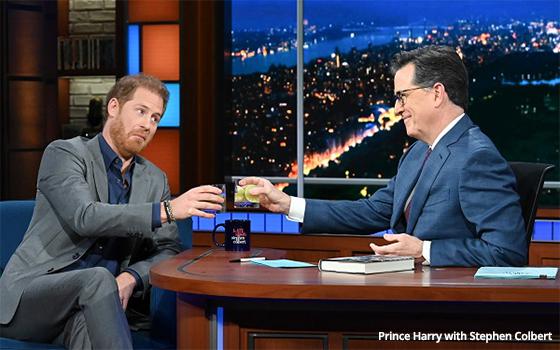 This past week, the outspoken outlier of the British royal family produced great results for the network in two high-profile appearances.

And now, CBS hopes to keep the momentum going for a third time with a TV interview imported from the U.K. just in time for the network to schedule it for tomorrow night (Saturday, January 14) at 8 Eastern.

The show, titled “Harry: The Interview,” premiered last Sunday night (January 8) on ITV1 in the U.K. That version was 90 minutes long, but the version being aired on CBS has been cut down to an hour.

But fear not. The 90-minute version will be available on Paramount Global’s pay streamer Paramount+ immediately following the West Coast airing of the one-hour version Saturday night on CBS.

Conducted by ITV news anchor Tom Bradby, the ITV showing drew an audience of 4.2 million Britons, according to Variety.

Nevertheless, ITV Studios licensed it to TV outlets in 77 territories around the world where it has been airing all week, Variety said.

The ITV interview was the red-headed royal’s first TV appearance to promote his new tell-all book, “Spare,” which was released in U.S. bookstores and online this past Tuesday.

The “60 Minutes” interview with the dashing duke, conducted by Anderson Cooper, propelled the show to its best viewership tally of the season -- 11.2 million total viewers, CBS said.

Two days later, it was on to “The Late Show With Stephen Colbert” on CBS, where the U.K.’s “spare heir” playfully clinked glasses with host Colbert (pictured above), perhaps in celebratory anticipation of the first sales figures for his book released earlier that day.

Indeed, the book reportedly sold 1.4 million copies on its first day in the U.S. and Canada -- the best first-day sales of a nonfiction book in the history of its publisher, Penguin Random House, The Wall Street Journal reported.

The prince was also charming for the “The Late Show,” which saw its audience swell to 3.15 million viewers for the Tuesday night episode -- the most-watched Colbert show since an appearance by Barack Obama in 2020.